To say we had a busy weekend is an understatement. From 5 pm Friday through Sunday, we had something going on pretty much at ALL times! The weekend started with a 5K (for me) and ended with a triathlon (for B), but also included some park time, a cookout and friends visiting.

Friday night started with a race! It was actually my first race since LM was born. One of the boards that B is on was hosting a 5k fundraiser (The Sunset Sprint 5k) to kick off the USA Triathlon weekend that was taking place in Cleveland. The course finished through the triathletes’ finish chute and included most of the sprint’s 5k course.

I was excited to race in my first 5k since baby #2 was born and had really no expectations. I knew it was a semi-hilly course, and my goal was just to not walk it and perhaps get under 10 min/miles (my typical not-sprinting pace these days is slower). AND I was going to be running it with Mary who is faster than I am, so I was hoping to keep up with her for maybe a half a mile or so.

I was pleasantly surprised- maybe it was the race adrenaline, but I finished with a much better time than I expected, including running the first mile in the 8s!

Saturday, we got to spend part of the day with some friends who were in town with their kids. In the morning, we started the day with a playground and park followed by lunch. That night, everyone came over to our house for a cookout. B made chicken, eggplant, green onions, and I made a salad and cookies to go along with the meal.

It was fun to see all the kids together – but wow, 7 kids in our house was a little overwhelming.

Sunday morning started EARLY – I got up at 4:30 to feed LM before getting FW ready — we were headed out to watch B compete in his first triathlon! I’m so proud of B – he didn’t have much time to train after LM was born, and all his runs and bike rides were done with a kid either in a trailer or stroller. 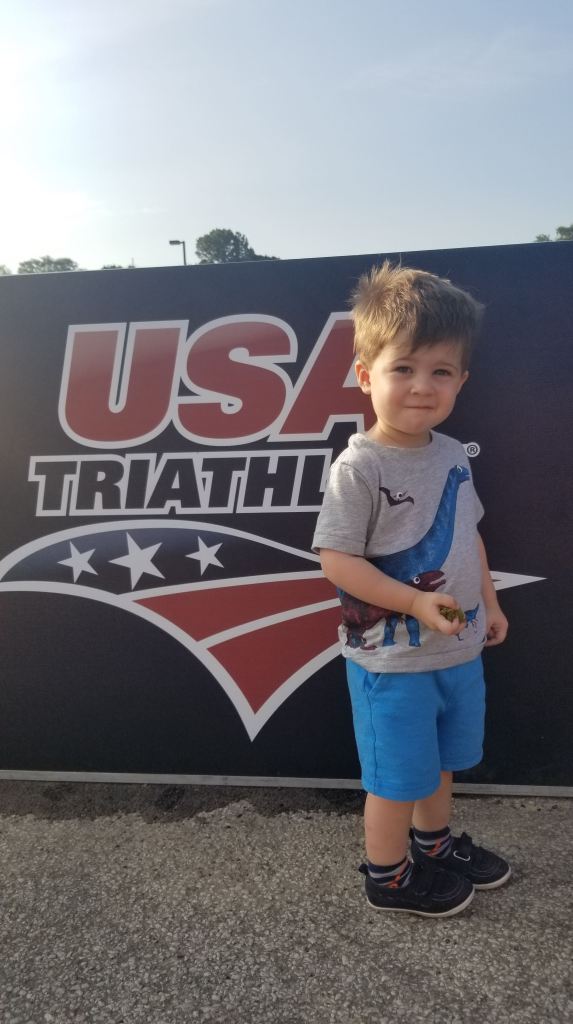 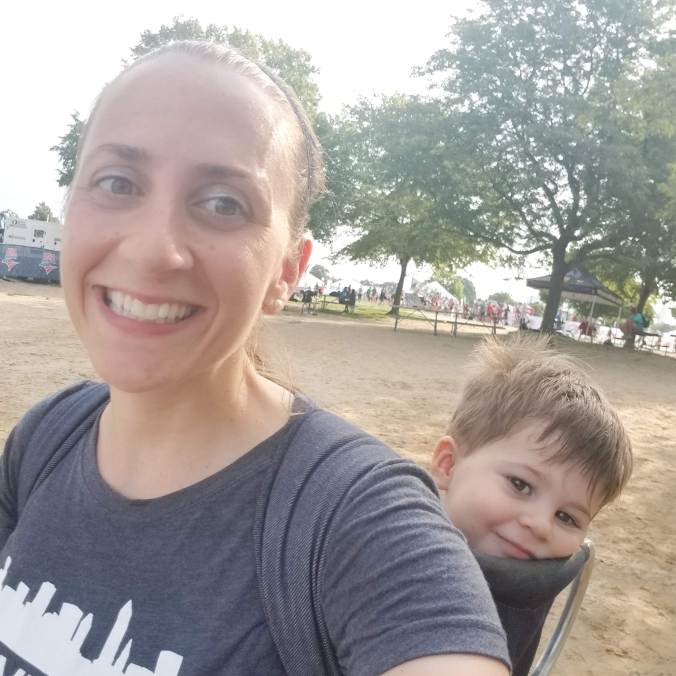 Some of our friends came to celebrate B at the finish line – and brought donuts! 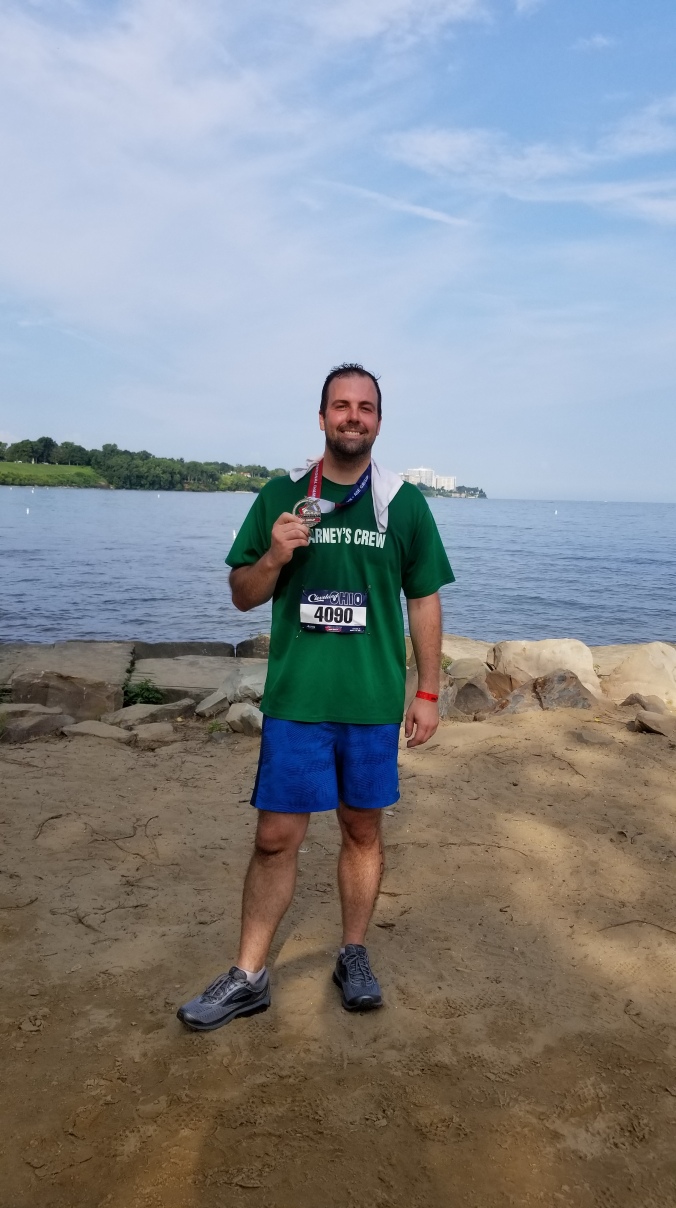 And we got a pic of most of the kids- minus Maddie and LM.

That afternoon, the four of us took a little walk out to lunch. I don’t know how B was still moving after his race but I was happy to get in some activity.

Sunday evening usually includes dinner with B’s family, but this Sunday instead was pizza night! We enjoyed pizza from Geraci’s before taking a family walk. Two family walks in one day (plus a triathlon for B) makes me a happy camper 🙂 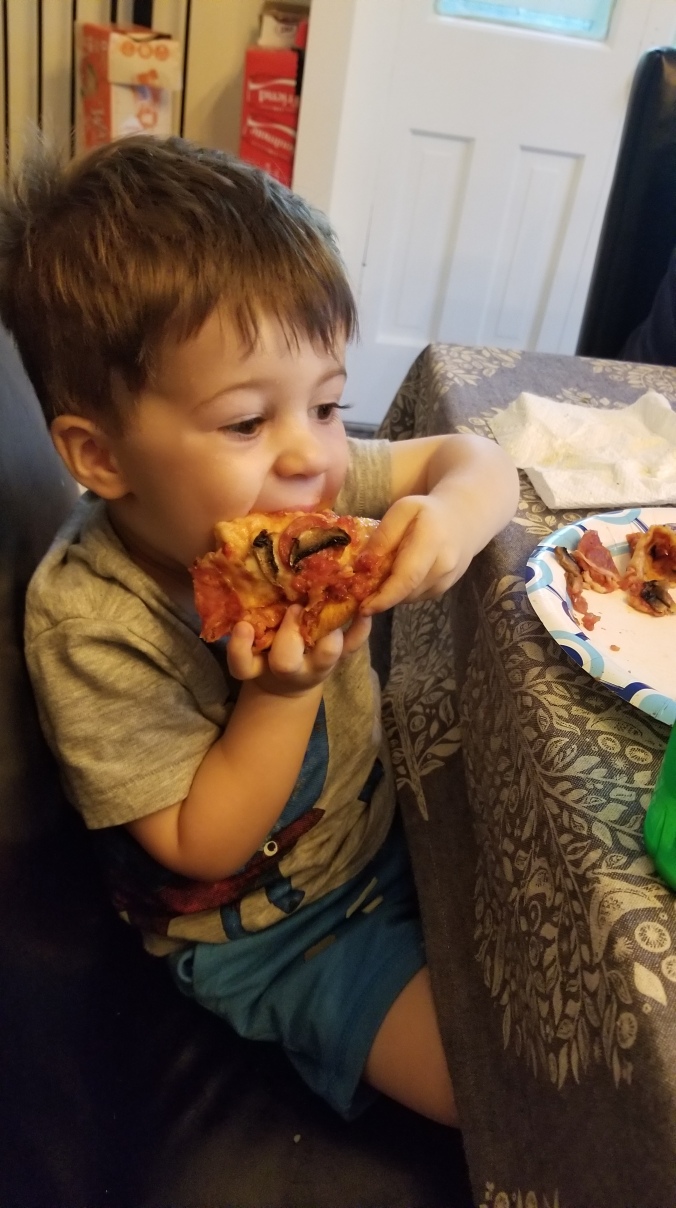