Seen at a club in LA

After an amazing time in the Bay Area, we were off on another drive down the coast and ready to spend a few days in Los Angeles as we wrapped up our West Coast adventure. We would be staying with B’s friend (and Best Man), Wing, who moved out West just this year thanks to an awesome job opportunity. And we would also be lucky enough to see my friend and roommate from college, Kate, who moved out to LA right after we lived in Boston together.

So, what did we think of our time in LA? Some overall impressions:

Okay, enough blabbering, here are some photos and highlights from our trip. 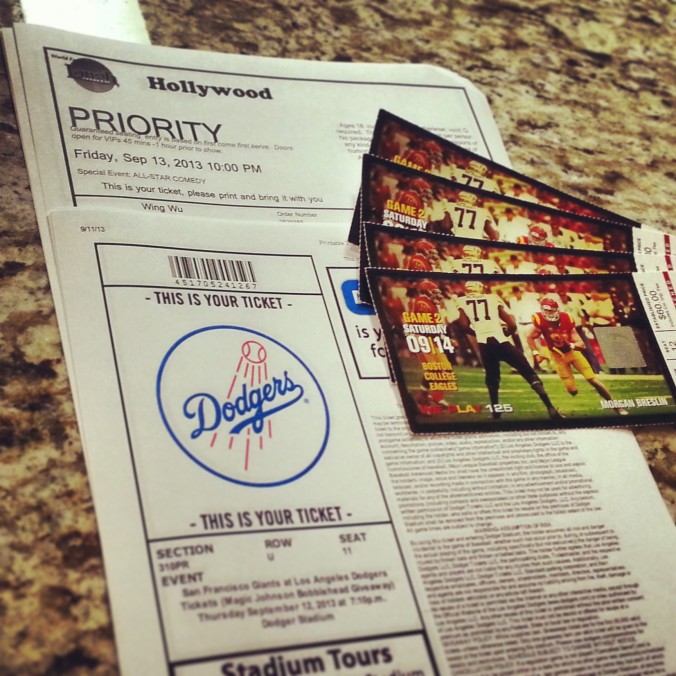 SO MUCH TO LOOK FORWARD TO IN LA!

Running around the Hollywood Reservoir – we did our 15K without any problems. We found the reservoir, which had some good views of the downtown and the Hollywood sign and was a 3.3ish mile loop – perfect for us, as we were able to do 3ish loops as Wing walked around once, carrying water for us. Yup, he was our awesome water boy!

Going to the beach!

Being touristy and taking photos of the Hollywood sign

Taking in a Dodgers game! AND they were playing the Giants so I got in TWO Giants games on this trip. Also, we got the all you can eat seats and feasted on the famous Dodger dogs, plus nachos, popcorn and peanuts. I need a detox after this vacation. 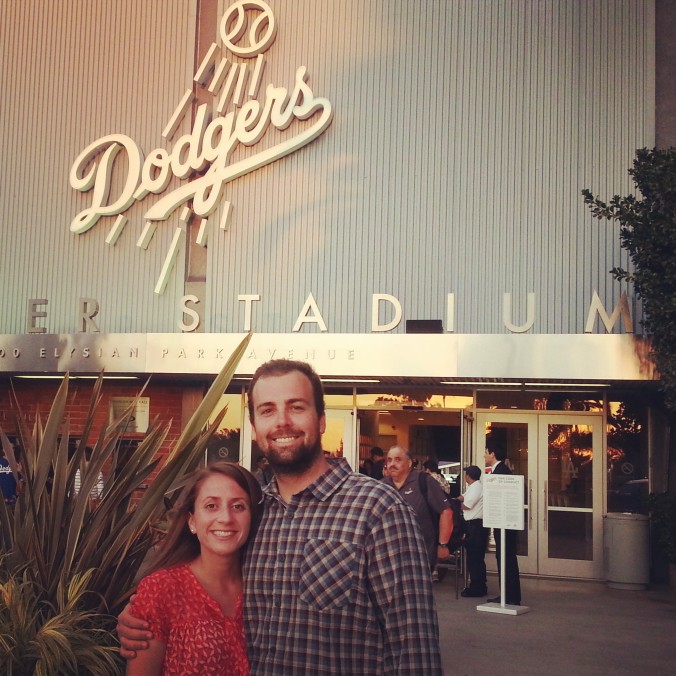 Coffee at Urth Café (always featured in the show Entourage)

Brunch from Homegirl Café. I had been wanting to go to this place since seeing the awesome movie G-Dog  at the Cleveland International Film Festival. You must read about them and Homeboy Industries if you don’t know their story. Here’s just a short blurb: Homeboy Industries serves high-risk, formerly gang-involved men and women with a continuum of free services and programs, and operates seven social enterprises that serve as job-training sites. HOW AWESOME IS THAT?

Catching a BC vs. UCLA game – sadly, we lost – but it was great to see them play (it wasn’t planned!) on our trip, see their huge stadium and of course meet up with Kate 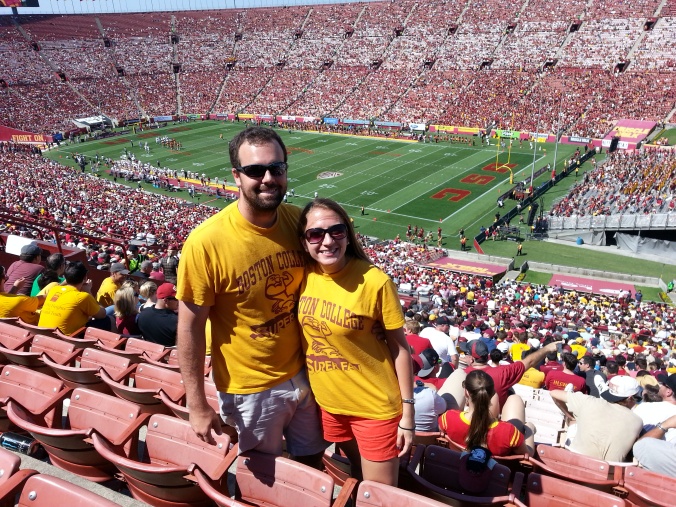 HUGE stadium – former home of the Olympics in LA!

Kate and me! Former roomies!

And then a really good meal, and beers, at My Father’s Office – I definitely recommend if you hit LA 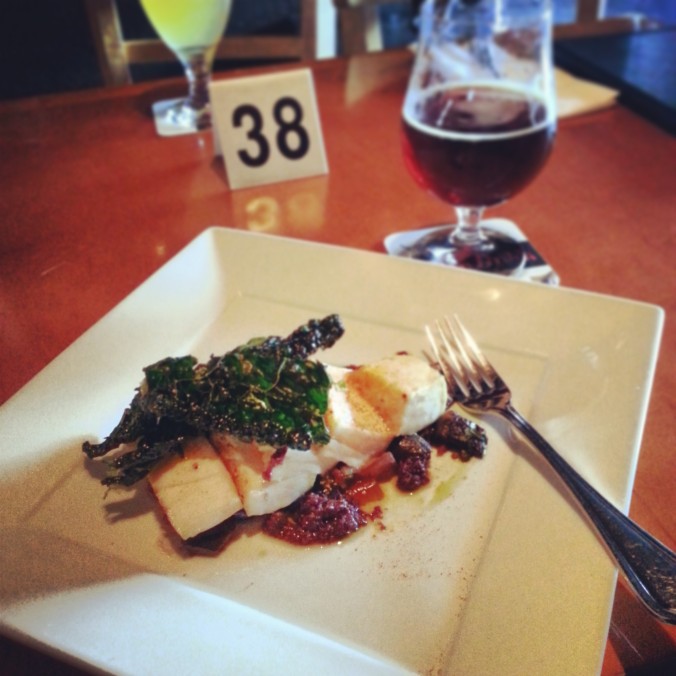 the boys loved their burgers – I loved my butterfish!

Seeing some amazingly fun comedians at the Laugh Factory – in just one show we saw a TON of comics! Highlights include Dom Irerra (who we’ve seen before), the super cute Chris D’Elia AND the guy who plays Montez on Workaholics! 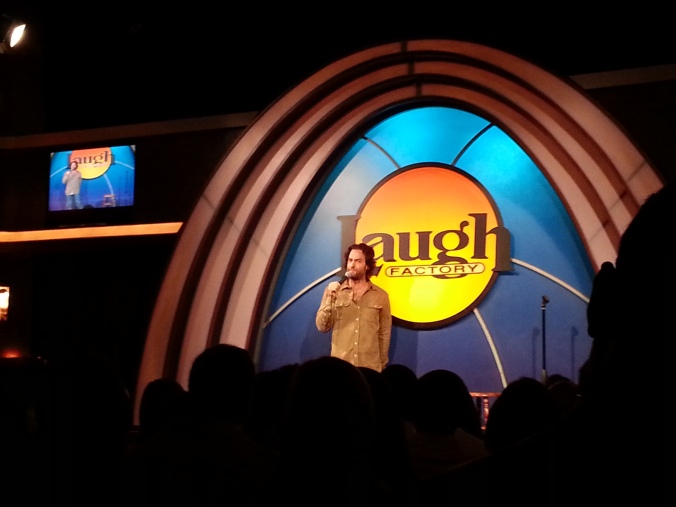 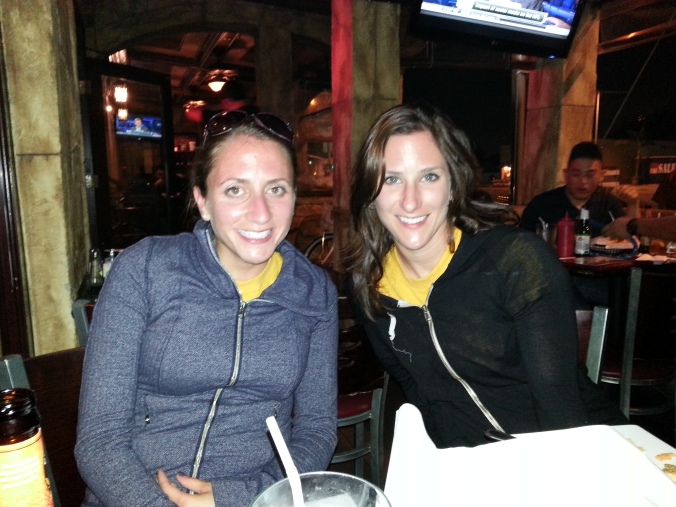 What a great trip! Now, it’s back to real life and back to the grind. Getting back to work after any trip can be stressful, but just knowing and remembering our amazing two week West Coast adventure will hopefully help with the struggle of getting back into things. Here’s to a GREAT weekend!