London Day One: B and I enjoyed a short flight from Dublin to Heathrow, and arrived in London around dinnertime. We looked at a map and decided to just take the tube to our hotel in Chelsea. After getting off the tube, we were walking and walking until we came upon a huge soccer stadium and got excited – that has to be the Chelsea Football Club! But it wasn’t. In fact it was the soccer stadium that was we had passed two two tube stops previously. Woops! We had gotten lost on the way to our hotel and walked 40 minutes in the wrong direction! We finally made our way back to our original stop, and of course found our hotel just a few blocks in the other direction.

After checking in, we decided to walk around the area to find a spot for dinner. We ended up selecting a nearby Indian restaurant, which had great food! Despite the less-than-nice server (how dare he question B’s ability to eat lamb vindaloo, or me to eat spicy chicken without rice?!) the food was great.

A group at the London Pride Parade 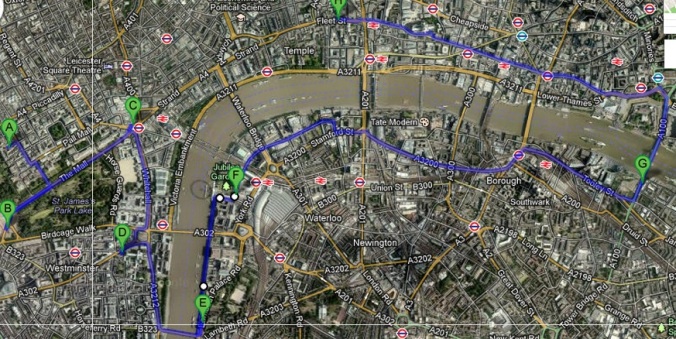 London Day Two: On our second day in London, it was time to explore! We took the tube downtown and got off at St. James’s Park and walked to visit Buckingham Palace, Trafalgar Square (where we ran into and got to enjoy the city’s Pride Parade!), the horse guard, Westminster Abbey, and more. Then we crossed the river and toured the other side – taking in the sights like the London Eye, The Globe Theater, the Jubilee Gardens, the London Bridge – before crossing the Tower Bridge to get a better look at the Tower of London and then find our way to dinner and drinks at the pub, Ye Olde Cheshire Cheese.  B had been to London twice before, and each time had wanted to go to this old pub (it’s been around since the 1500s! Or as one Brit pointed out when we were there, “Longer than your country has been around.” I did mention that America was around..just not our government) and we finally made it there! My food was kinda bland, but the old pub atmosphere, shared tables and drinks made for a fun night. 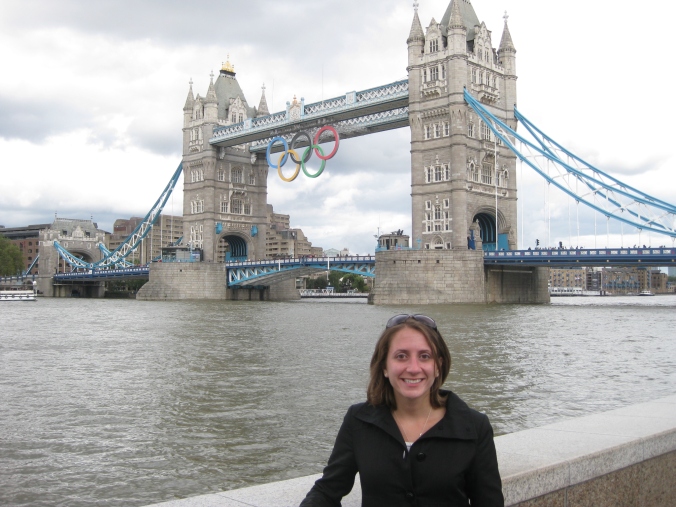 in front of the Tower Bridge – ready for the Olympics

B and me at Ye Olde Cheshire Cheese 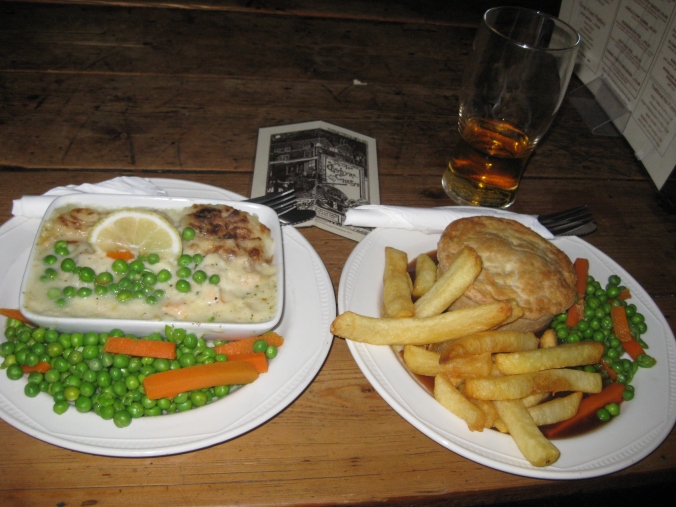 In case you didn’t realize it, Ye Olde Cheshire Cheese is really old

London Day Three:B and I took the train again to St. James’s Park and decided to spend the day seeing some of the sights we hadn’t gotten to the day before. We first started at the Churchill War Rooms museum which was really cool. While B is a history buff, I hadn’t expected to enjoy the exhibits so much – I definitely recommend checking it out if you’re looking for something different, and indoors, to do in London. After spending a few hours in the museum, it was time to go shopping! We hit all the ones on my list (including Top Shop and Harrod’s) minus Boden, which apparently only has two stores and not downtown. Oh well. After a long day of touring and shopping, it was time to try a typical Sunday meal – a roast. We headed back to Chelsea for yet another meat and potato (chips this time) meal and of course a few pints. Being Sunday, not much was open too late, which wasn’t that bad, because we had to be up early for our return flight to Dublin. In Dublin we were going to rent a car and head west, beginning the second adventure of our trip. More to come on that …

(Part one of this post, our Dublin trip recap, can be found here)

As you may have gleaned from the past few photo posts, B and I just came back from an amazing European vacation, where we traveled around Ireland and visited London. It was a GREAT trip, even better than I had expected.

Let me start by admitting that Ireland had never been on my list of places to visit. It wasn’t that I didn’t want to visit it – I love traveling and had heard many great things about the country – it was just that I’m not Irish and my list of places to visit have included Asia  (yes the whole continent), New Zealand, Belgium, Turkey, the Caribbean, Spain, and so on – but never Ireland. BUT I am SO glad we went. Ireland was beautiful, breathtaking, pastoral, etc. and the people were more than friendly. So what did we do? Here’s an outline of our itinerary, some of my favorites, and some photos for you to enjoy.

Dublin Day One: B and I flew out of Cleveland late Tuesday and arrived in Dublin just in time for breakfast on America’s birthday- July 4! We somehow made it from the airport to our hotel and dropped off our bags. I felt pretty gross and tired from our 7ish hour plane ride and no shower, but the adrenaline and excitement of being in the new country kept me going! We walked around Dublin, starting at St. Stephen’s Green, a beautiful park area right next to our hotel. After that we happened to literally run right into Grafton Street, Dublin’s shopping and music hub – in front of the shops on the cobblestone walkway are tons of musicians putting on performances, trying to make money and get discovered. Have you seen the movie Once? It’s where the two main characters first meet… beautiful! 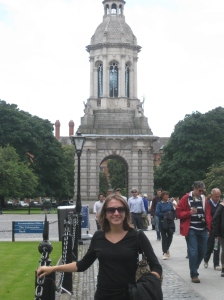 After some window shopping, we found Trinity College and took a tour of the campus and its library, which meant we got to see the famous Book of Kells and the Long Room. I did sit down at one point in the Long Room and found myself almost passing out – which meant it was time to go, so B and I headed to find his sister Katie, who was in Dublin working for an organization called Friends of the Elderly. We found her, dancing with some elderly people during their Fourth of July celebration, which was pretty amusing to see. Are you picturing this? A bunch of elderly Irish people, dancing with Katie, to some American-style marches, in a room decorated with red, white and blue, and of course, tea and scones.

After meeting up with Katie, we finally headed back to our hotel and were able to freshen up and take a quick power nap. For dinner, we met up with Katie at the Brazen Head – the oldest pub in Ireland! I enjoyed a lamb stew, while B got his fish and chips. After our food and drinks, we headed to Kearney’s for some live music, dancing (including to the song Galway Girl!) and whiskey tasting. Not a bad first day! 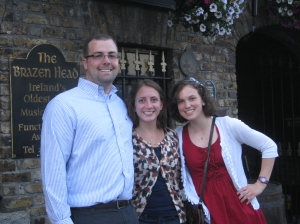 The three of us outside the Brazen Head

Dublin Day Two: B and I slept in and then enjoyed coffee and brunch right off Grafton Street. After brunch we decided to walk as much as we could before our feet fell off to check out some of the other places on our to do list, including: Dublin Castle, the free museum at the castle – the Chester Beatty Library (which I HIGHLY recommend – it was really cool and filled with tons of artifacts!), the Guinness factory, St. Audeon’s and the Kilmainham Gaol. We almost didn’t make it to the old jail – after walking around and around (and of course not asking for directions) we finally made it there JUST as the last tour was going on! 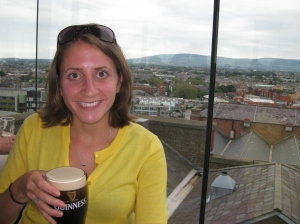 Enjoying a Guinness at the Guinness Factory Tour

After a long day of walking around and touring, we met up again with B’s sister for drinks and traditional live Irish music at the pub, Cobblestone. Not realizing the place didn’t exactly serve food, B and I grabbed some shawarma on the way back to hotel that evening. I love street food!

Dublin Day Three: B and I slept in again and then decided to take the bus to see UCD, the campus where his sister was living. Well, we actually were going to leave our bags with her while we were in London (Spoiler alert!) but realized then that we wouldn’t be able to get them upon our return to Dublin so our trip wasn’t really necessary. So we returned back to the city center and went shopping! I bought myself a pair of earrings, some post cards I never sent, and continued to peruse stores looking for souvenirs. We then braved the pouring rain and headed to Dawson Lounge, what’s “probably the smallest pub in the world” (as they claim) for a drink before catching our flight to London! (to be continued …)

Dawson Lounge – “probably the smallest pub in the world”