I’m just getting back from a week of vacation spending time in New York and California with family. I’ve already written a few recap posts (NY, Sonoma), but before finishing up those posts, here’s a quick Friday Favorites dedicated to some of my favorite photos from our trip. Here you go – a few photos and one sentence as to why I like each photo.

1. Redwoods Selfie: Love that it shows all of us just hiking in the Redwoods, a place that is seriously so unbelievably beautiful, that it’s only better if you’re sharing it with family. 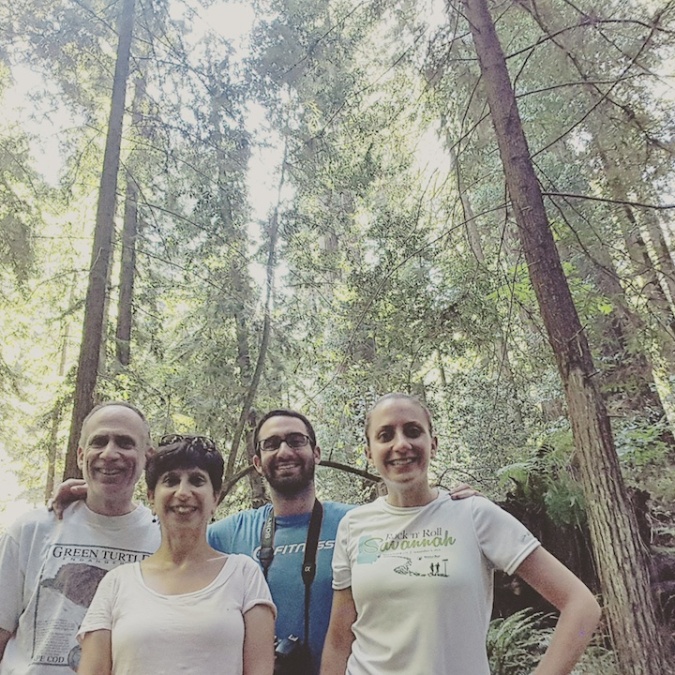 2. Family in Jersey: Again, love that it captures me and my extended family – we’re hardly ever all in one place! 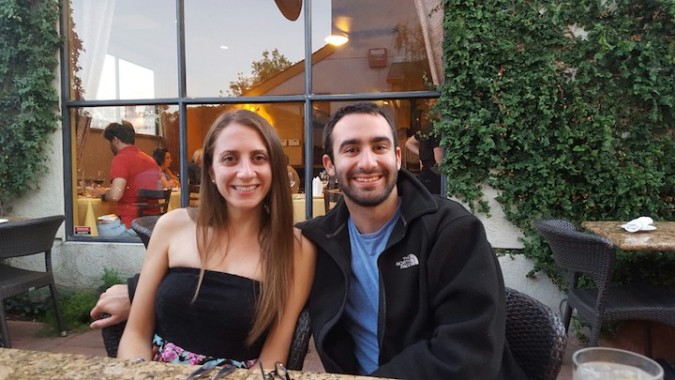 4. Greg and me and the vines: A traditional brother-sister selfie. 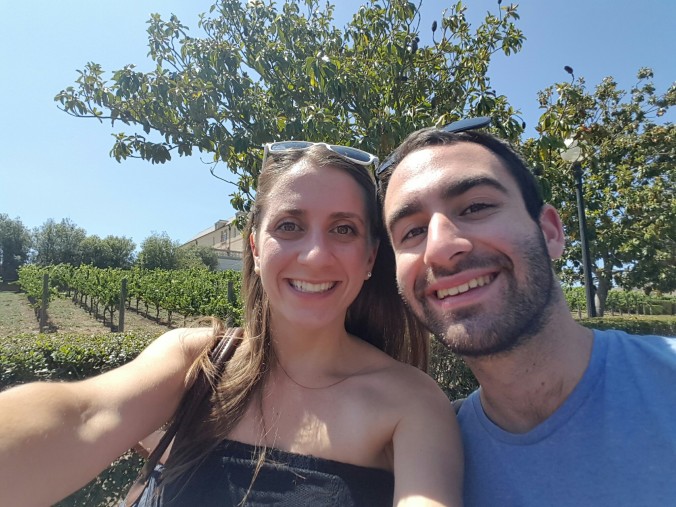 4. Lavender fields at the vineyard: I can look at this picture and smell how beautiful it was!

5. Parents on our walk along the Mendocino Headlands: They make me happy ❤

AND a bonus: Mom feeding the chickens: Because when else are we ever feeding chickens, or even around wildlife (and she looks like she’s having a great time!)? 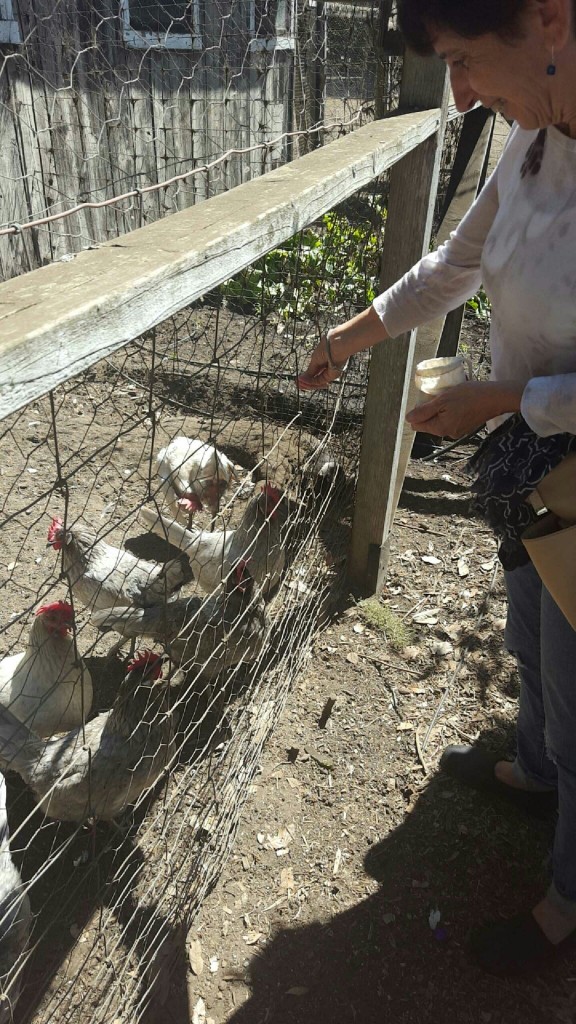 Happy Friday! I’m linking up today with Life in Leggings and Fitting it all In!

For those of you that know me, you probably know that I’m a native New Yorker. I was born around New York City and lived in Staten Island for the first several years of my life before moving upstate. The majority of my mom’s family still lives in and around Staten Island and New Jersey, but B and I haven’t made the trip back in more than a year.

So a few months ago, when we got the invite to my cousin’s surprise birthday for this, I knew we had to go – I’d get to see my family, introduce B to Staten Island AND get to see my mom for her birthday, too.

It was a great weekend – not only did we get to see family, but I got to show B some of our old favorite Staten Island spots.

The weekend actually started off early – Friday morning with a 10 mile run with B and Mary. Getting up at 5:30 to run on a vacation day isn’t what I usually like to do – I love my sleep! – but it had to be done.

This photo sums up how I felt.

At least we ended with a treat from Restore!

Then we got on the road to New York. We stopped first to visit my Aunt Glad. She just got moved into hospice, so I’m glad we got to see her in her new space.

Then, we headed to Staten Island to meet up with my parents. We enjoyed pizza at one of our old favorite spots, Deninos. The pizza was sooooo good. 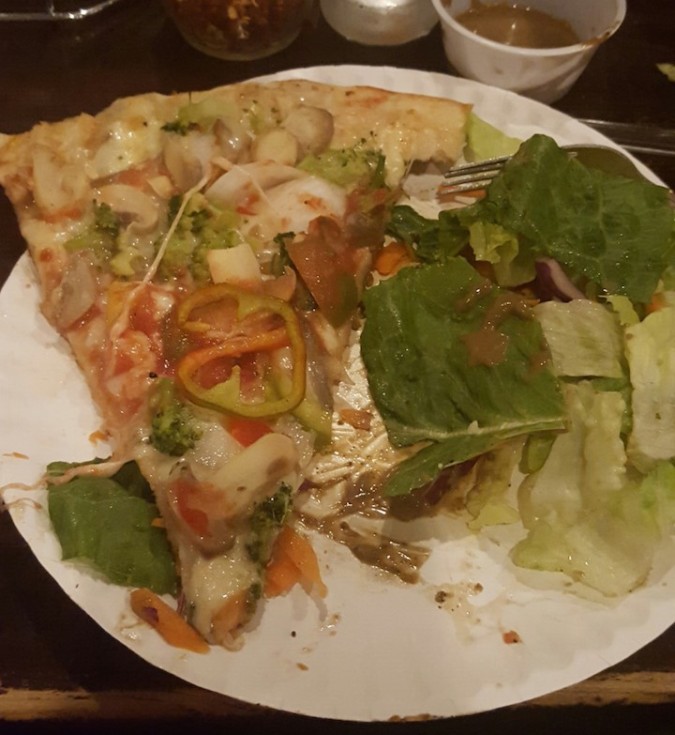 Saturday morning, after an easy 5k shakeout run in the hotel,  it was time for the party. It was so great seeing my family and celebrating.

The party was at a restaurant on the shore, so we took a nice walk after the party along the beach. There were so many people out – it was the picture perfect day!

We were too stuffed for a real dinner after the party, but of course there is always room for dessert. We enjoyed Ralph’s Italian Ice for dessert – another SI tradition. The cannoli ice was delicious!

Sunday morning started early – I said good bye to B and then my parents and I were off to the airport. We had a trip planned to see my brother in California! Another early morning, but waking up early to travel is something I can do every so often.

And now we’re off to California! I’ll share another update after the trip. But until then – have a great week!

PS – Linking up with Running N Reading and Her Heartland Soul today again!

Friday at 3 p.m., I shut down my laptop and put my phone on the Out of Office Mode. I had changed my Out of Office email to read, “I’m in Atlantic City for Petefest 2012 (don’t ask). I’ll be back, and checking email, on Monday, March 12” and my weekend was ready to begin!

This weekend, B and I traveled to Atlantic City in honor of Petefest 2012, the celebration of B’s cousin’s 21st birthday. Though I’d been to Jersey many times before (being from NY and Staten Island, I obviously have family that lives there), including the Jersey Shore (Seaside Heights, what what!), the only impression I had of AC was from Sex and the City. Who doesn’t remember that episode where it’s Charlotte’s birthday and they go to Atlantic with Richard right after Miranda has had a baby? I digress.

We hit the road around 4 p.m., picked up B’s sister, and headed on the 9 hour drive to New Jersey. We pulled into Atlantic City right around midnight, passing by the skyline – larger than I had expected. We arrived at the beach house about 10 min away from AC that B’s Aunt Marie had rented, and caught up with half the group (the other group was out gambling), including the birthday boy, who had returned from a day of celebration.  We stayed up to celebrate a little, but then decided against hitting the casino and instead headed to bed, as we had a 13.1 training mi scheduled for the next morning.

The next day we woke up early, ran our half marathon training run (more on that here), and then joined the rest of the group for a day of celebration.

half marathons make me sleepy!

After a quick nap (13 miles tires me out!) I put on my Petefest Shirt and joined the others in some games, including the longest game of Kings EVER and a heated game of Bunco (not to brag but my team may have won).

Aunt Marie prepared a pretty awesome meal of cavatelli and meatballs, and then we all got ready to head out for the night. Aunt Marie’s friend Bev did my hair – Jersey style of course!

We headed to the Legends Concert – the birthday boy’s request – and saw a rocking show of Tina Turner, Elvis, Ray Charles, the Blues Brothers and Liza Minelli. We then headed to the casinos to gamble and party some more. 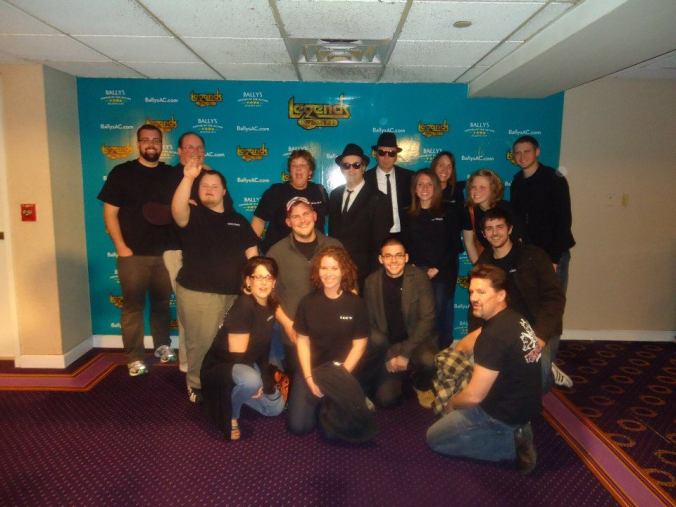 The group with the Blues Brothers

What a fun night! When the birthday boy got tired, B and I headed back with him, knowing we’d be getting up at 7 (really 6 a.m. with the time change) to drive 9 hours back to Cleveland for B’s mom’s birthday dinner. But not without a stop in Philly to meet some college friends for brunch! Mitch (who had visited us a few weeks ago) had suggested the famous Philly brunch spot Sabrina’s, but after finding out there was a 1.5 hr wait (which would make us late for dinner), we headed to Hawthorne’s and enjoyed a delicious brunch! My eggs benedict with smoked salmon were AWESOME. We chatted it up with our friends, then headed back to Cleveland, and made it to dinner at 6! We were home by 10 p.m. and crashed from great weekend of 18+ hours in the car, 13.1 miles of running, fun, family and big hair.