B and I hosted our first gathering at our home this week! We decided to have some friends over for a low-key New Year’s Eve – complete with food, some drinks, and a few babies/toddlers.

The day started with some COLD outside play for FW. Confession – I didn’t leave my house at all that day because it was so cold, so while B and FW were outside (FW was outside for all of 5 minutes or so) to shovel, play, etc. I was inside helping to prep everything. 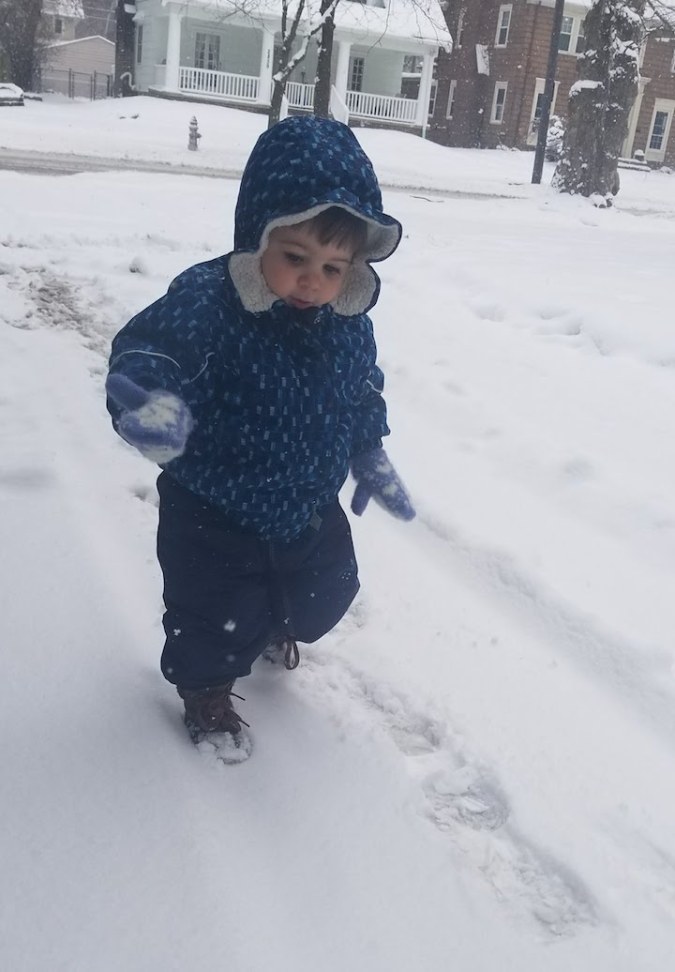 We did some decorating had tons of food!  We finally got to use our dining room, too, which was great – it’s a room that we’ve done a good amount of work to since moving in (painting, putting in a new ceiling, taking out the fan, getting  a new light fixture, plus a rug and furniture) so it was so much fun to share it! 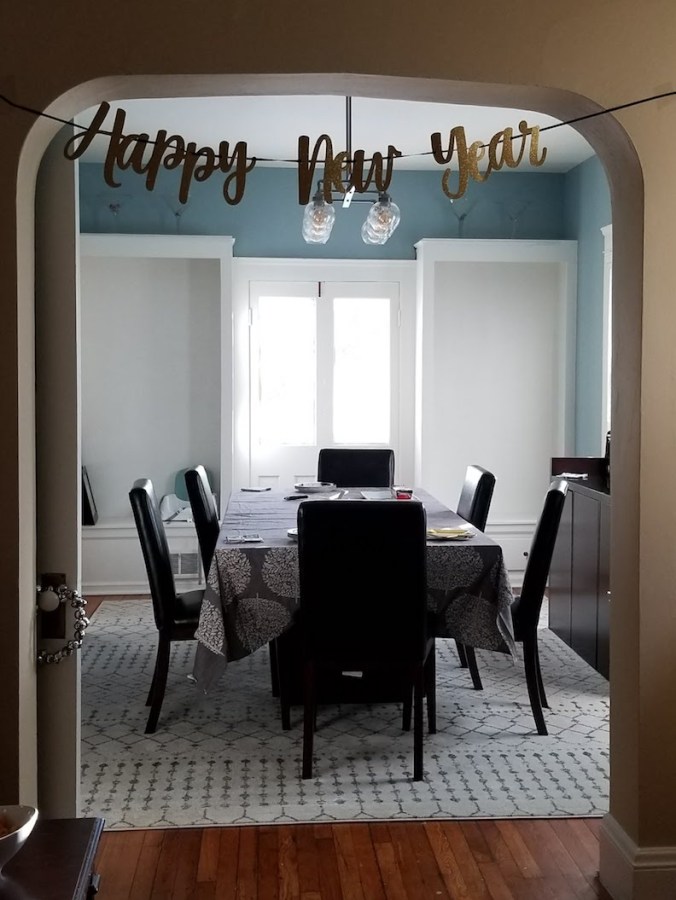 We had a ton of food to share – most of it isn’t even pictured! But B and I made pepperoni bread, pizza, baked ziti, eggplant parmesan and Lidia’s Brussels sprouts. We had friends bring over some delicious dips and charcuterie.

Oh, and of course I made some desserts. In addition to the graham cracker toffee that I’ve now made 3 times this holiday season, I also made some peanut butter cup cupcakes and mocha cupcakes.

FW had fun hanging out with all our friends. 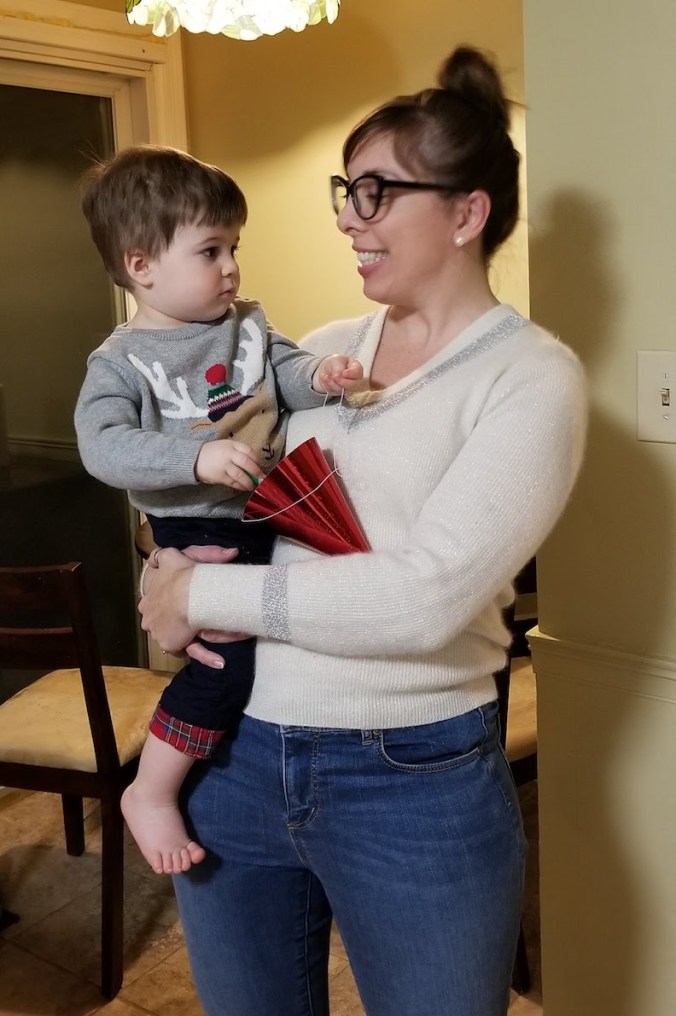 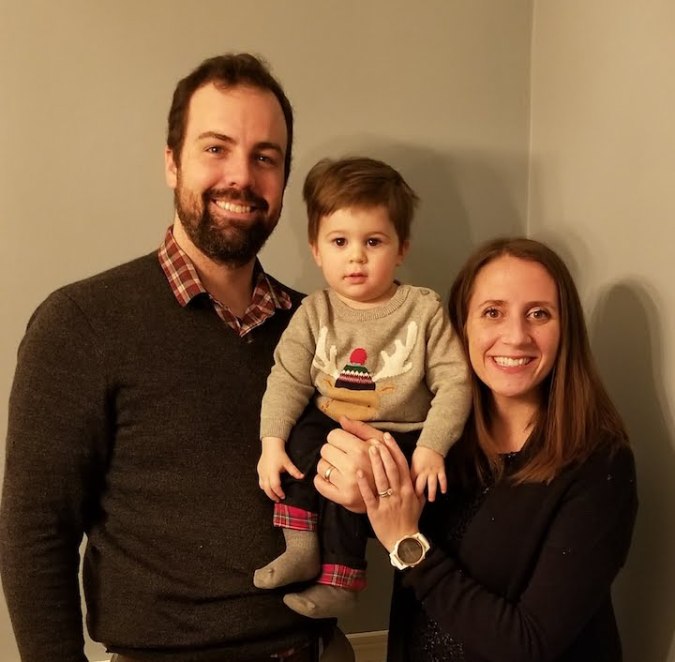 Happy 2018! Hope yours is off to a fabulous start.

I have been lucky enough to have time off from work during the holidays and have been enjoying the days with B and FW, celebrating with my family, B’s family and some friends.

It’s going to be hard to go back to work this week; I had such a great time bonding with FW – who is now 6 months old! – during our time off and I love love LOVE the holidays so much. 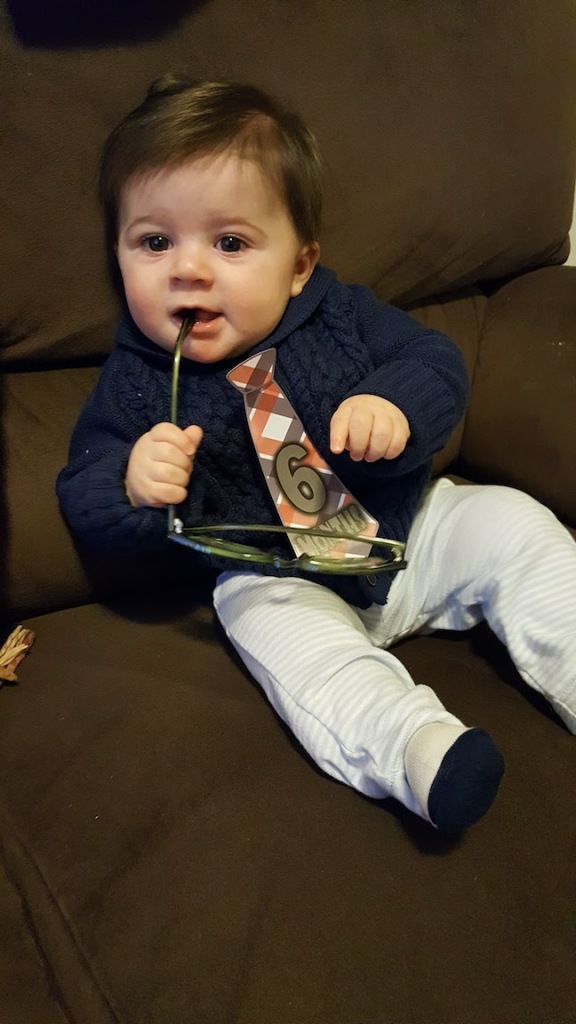 Speaking of the holidays, here is how we spent our time – I should have written a few posts about them by now, but B, FW and I have all been sick on and off (mostly on) this week and my brain has been too fuzzy to put down thoughts.

1. Spending time with family. We went to NY and saw my family, some of whom had not yet met FW! We also spent time with B’s family in Cleveland when we returned after Christmas. 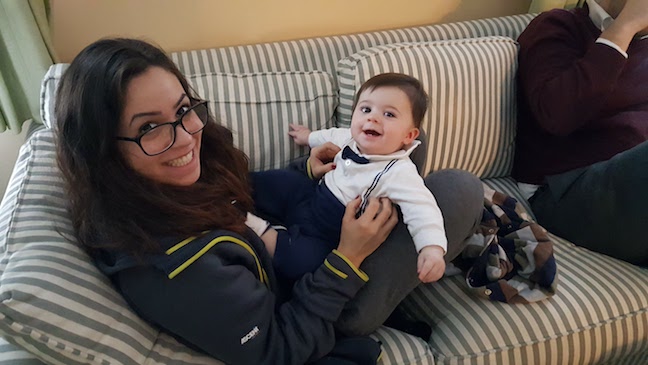 2. Seeing friends! While in NY, FW got to see my friends Katie and Jane. They had both met him before, but of course were excited to see how big he had gotten.

3. Running. Because how can I have time off of work without running? I started the week off with a 7 miler on the treadmill but after getting sick have been struggling to keep up my workouts. I got in 2 runs in NY (including one stroller run with B!) and I also started off 2017 with a 3.5 sloooow treadmill run/walk. 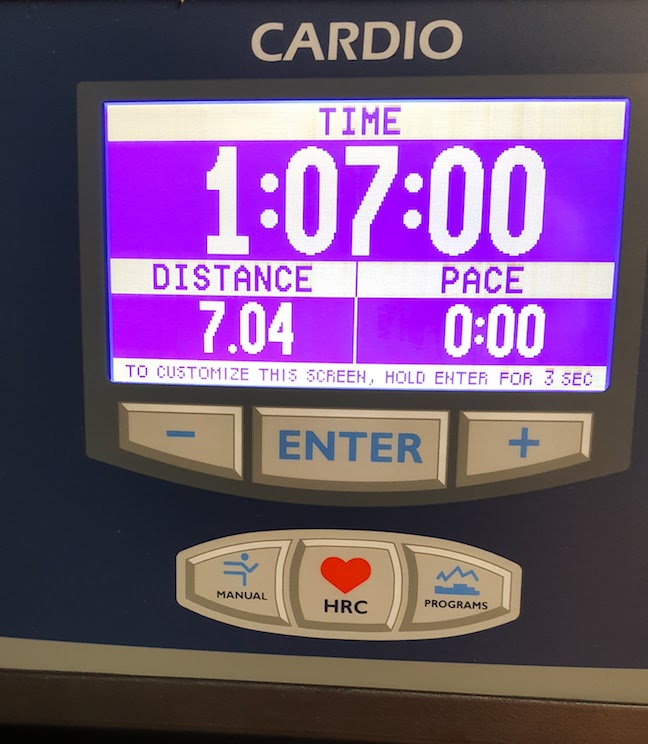 4. Going shopping. We hit up the West Side Market several times … I just can’t get enough of shopping there and having time off to do it during the week was great. 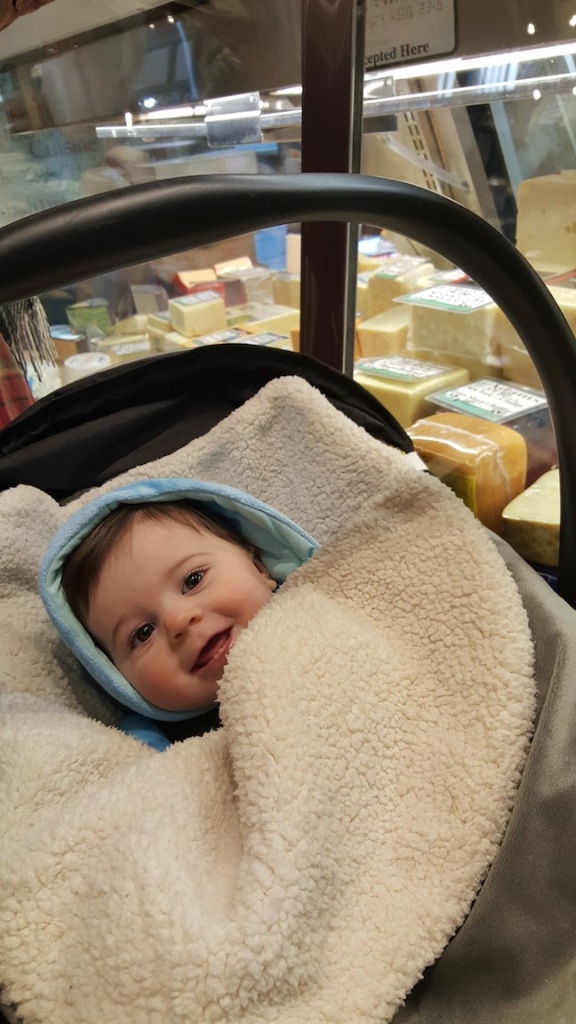 5. Eating lots of good food. Not just B and me – but FW is trying out some real food too!

how FW feels about most food 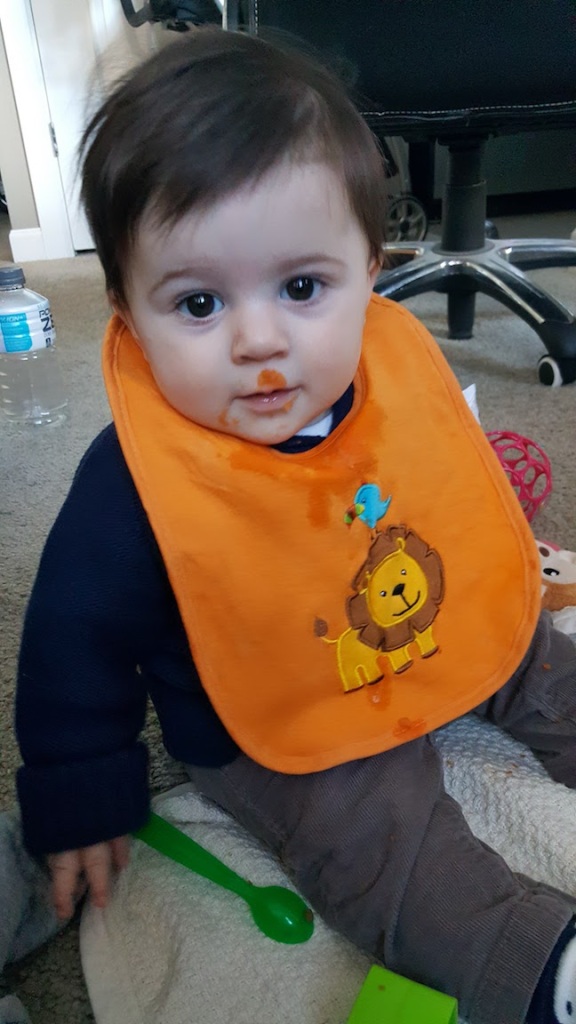 love it when B makes me breakfast!

5. Relaxing. Being sick, we didn’t get in nearly enough relaxing – or sleep – but it was nice to read and spend time with one another. I finished the book, Nightingale and loved it!

6. Dressing like one another. We couldn’t help it – one day FW, me, my dad and our cousin’s dog were all in similar attire! And another day, FW and I both wore navy sweaters and corduroys (and B was in his navy too!). Guess that’s what happens when you spend a lot of time with one another. 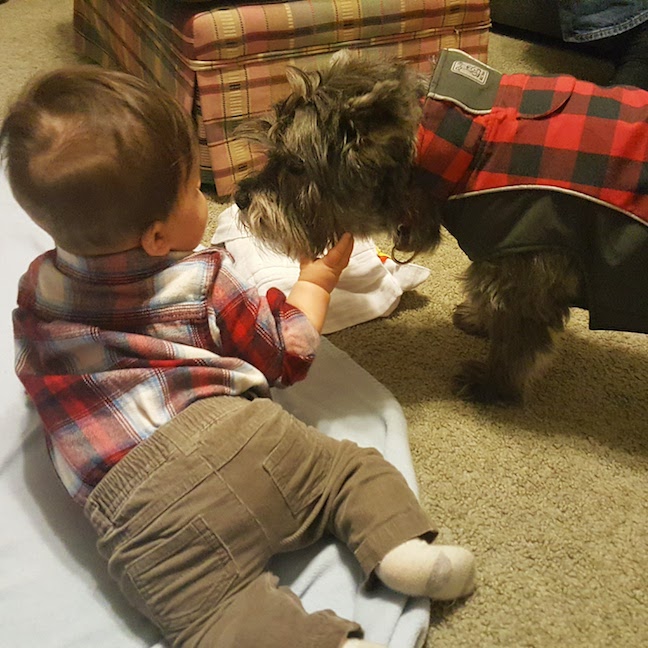 7. Enjoying the great outdoors. We lucked out with some great weather in NY and in Cleveland and got in a few outdoor walks and runs over the time. I think FW likes being in the burbs 🙂

New Year’s Day walk with FW and B – such blue skies!

8. Going to the movies! B and I hadn’t been to the movies in FOREVER and it was so great to finally be able to enjoy a movie – in fact, we went to TWO during our time off! I highly recommend La La Land!

I’m linking up with Katie and the weekly wraps.