I’m back to eating a ton of fruit again. I can’t help it – there’s so much good fruit in season and so much local fruit at farmers markets that I can’t help myself! And you’ll see that in today’s What I Ate Wednesday. I had fruit at every single meal.

Breakfast was a spinach banana muffin and  a few bites of cheese that I ate while putting together FW’s lunch, and then a peach when I got into the office.

My midmorning snack was a big cup of fruit salad (see – more fruit!) and some of these sourdough crackers. I LOOOOVE sourdough bread, and my coworker gave me these delicious crackers. They are so good! And Le Cracker is a local company! 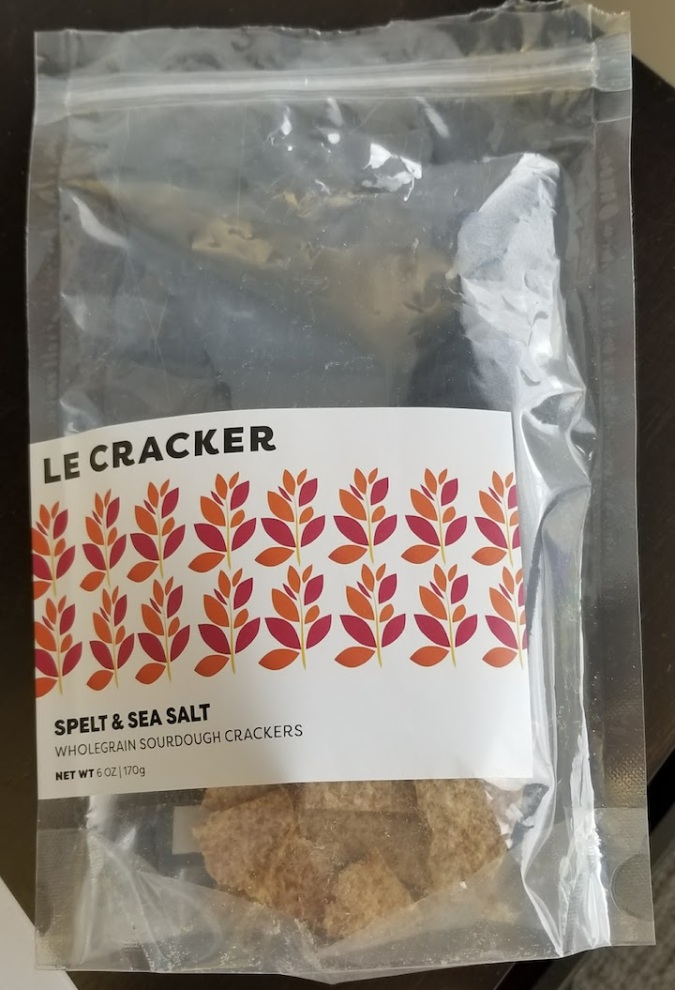 Lunch was some leftovers from dinner – a homemade vegan chickpea patty, some sweet potato fries, zucchini, avocado and a handful of cherries.

And my afternoon snack to tide me over until a late afternoon/early evening meeting? You guessed it – more fruit! I had a nectarine and some cashews.

I had to present at a meeting that didn’t start until 4:30, so I knew that I’d be home late for dinner. So I decided to try out a new slow cooker recipe, Sriracha Peanut Chicken. It was pretty good – I followed the recipe for the most part but used fresh peppers and onions, homemade peanut butter, breasts instead of thighs (and only 1 lb) and a lot more sriracha.

I liked it but it isn’t one of my (or B’s) top 3 slow cooker meals so I’ll add it to the rotation but we probably won’t have it for a little while. (Confession – one thing I’ve started doing as a working mom is trying to incorporate a crockpot meal at least once a week. It makes my life so much easier!) I served it on top of some cauliflower rice. Oh, where’s the fruit you ask? I forgot to take a photo but in the top right of the photo you can see a tupperware that contained some mango. Yum!

And that was it! I was pooped after dinner and after catching up on emails from my meeting out of the office, I hopped in bed.