I’ve said it before and I’ll say it again, but I am so lucky to be in a great city with access to such a wonderful, thriving, cultural scene.

I happen to live, play and work downtown Cleveland, home of Playhouse Square, which is the largest performing arts center in the country outside of New York. And one of the perks of living here is that sometimes I get to see GREAT Broadway shows.

This week, I was invited by Playhouse Square to see The Tony Award winner for Best Musical, A Gentleman’s Guide to Love & Murder. I got two complimentary tickets, so B and I enjoyed a night out.

We even got to sample some delicious pasta and treats from Maggianos at the media preview event before the show!

Have you heard of the show? Here’s the plot in a nutshell:

Some highlights from the show:

The show was a blast. It was funny, had catchy music and was fast paced. Come on – when was the last time you saw a musical about a serial killer? Okay, I guess Sweeney Todd counts, and I do love me some Sweeney Todd – but this musical was less gory, less gruesome and the killer was more lovable.

Even B enjoyed it. We both laughed at the funny parts and clapped (and may have even cheered) at so many other parts as well. The cast was great – so many of the characters were unique and there’s even one guy who plays SEVERAL roles.

I don’t want to give too much away – so go see it yourself! A Gentleman’s Guide is in town until November 15, 2015. In Cleveland? Be sure to go to PlayhouseSquare.com to get tickets before the show’s gone.

Disclaimer: I was given two tickets to see A Gentleman’s Guide to Love & Murder, as well as invited to attend the pre-show reception by Playhouse Square. All views, as always, are my own.

One thought on “A Gentleman’s Guide to Love and Murder” 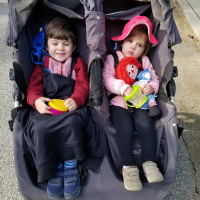