Well, Cleveland Marathon weekend has come and gone. It’s always such a great weekend and I love all the events that I get to take part in – thanks to being an ambassador – that I’m a little sad it’s over.

I’ll start by saying that I was having mixed feelings about this year’s events. Why? Being 39 weeks pregnant (due date=THURSDAY), I was unsure of my ability to run/walk. Sure, when I signed on in the fall, in my head I thought, “If anything I can at least walk 6 miles – that’s nothing.” But as I got further and further along, I realize that walking a 10K with extra weight,  a baby in my belly pushing on my bladder, and little sleep (yay third trimester), may not be what I wanted to do at this point in my pregnancy.

BUT I’m so glad that I did. I really do love running and even when it’s not so comfortable (a.k.a. NOW), it’s great to be part of a fun race with fun crowds and a great location –  CLEVELAND!).

In any case, my weekend started early with fun marathon events. 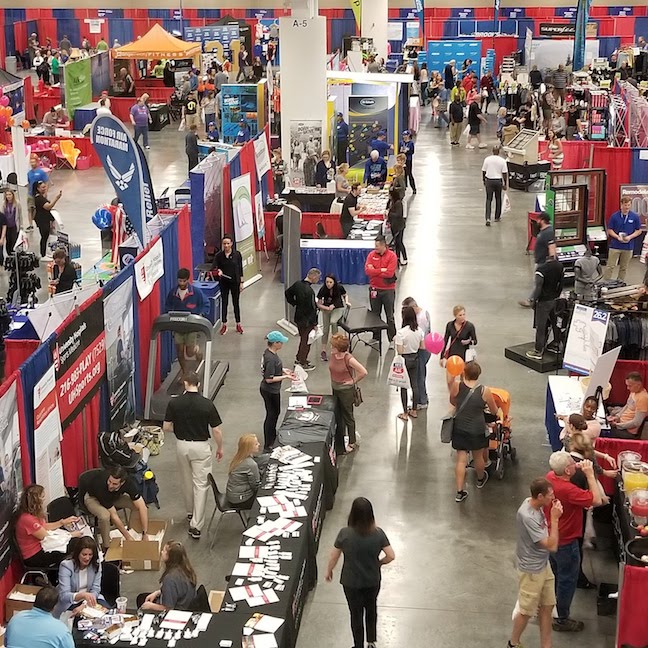 First, the Expo! Cari and I headed to the Expo and had to take our annual race weekend photo. A little different than last year’s photo, huh? 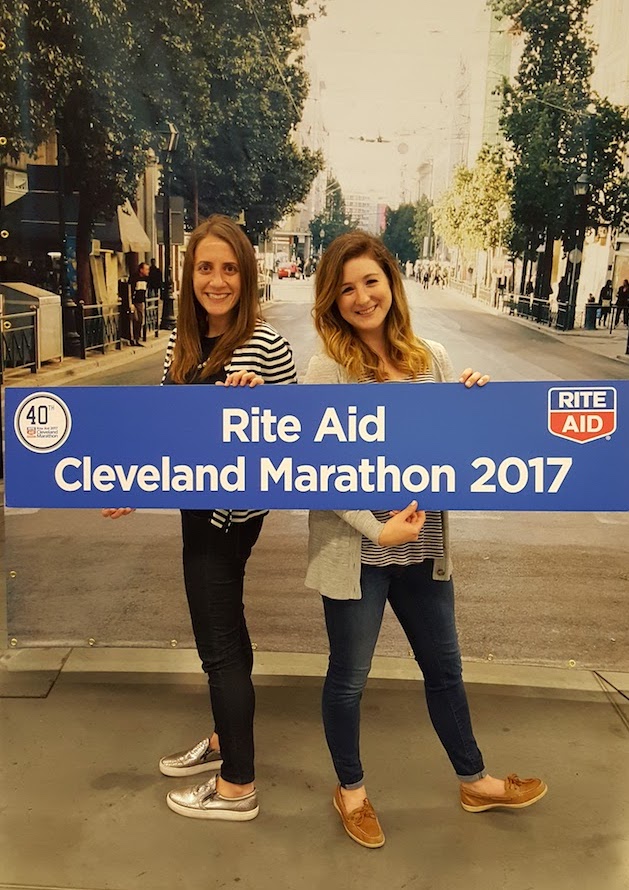 Then, it was time for the pre-race reception/dinner. As a race ambassador I get to get dressed up and mingle with all the VIPs (sponsors and elite runners!) in town the night before the race. The event always has good food, live music, a great location – it’s at the beautiful Galleria – AND I get to see my fellow ambassadors! 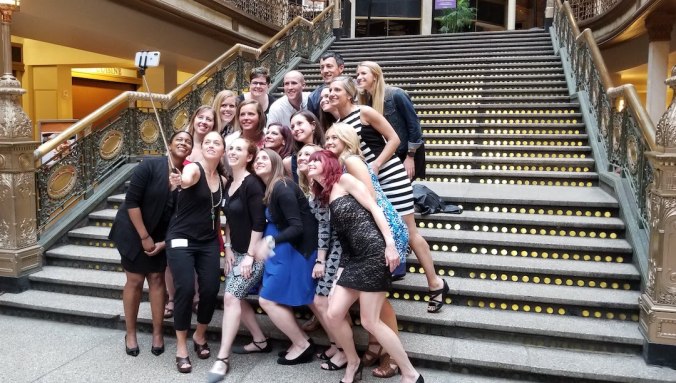 Saturday morning started early (but not as early as Sunday …) with our alarm going off to get ready for the Cleveland Marathon 5k. This is my third year participating in the race’s Challenge Series, which involves running an event on Saturday (either a 5k or 8k) and then an event on Sunday (either a 10k or full/half marathon).

The race was fun and not as painful as last weekend’s 5k for some reason. Oh, and B wore FW in a backpack and RAN ALONG SIDE OF ME. I still can’t believe he did that.

After the race, we hung around for a little and checked out some of the event they had going on. The real event is Sunday, but they had some tents and things set up. Including a place that had THESE things – FW ran over to it and immediately started playing. Let’s just say I know what he may need for his birthday!

Then, picked up some bagels from our favorite local bagel shop. They had piping hot apple cinnamon bagels right from the oven, which was a perfect post-race meal. 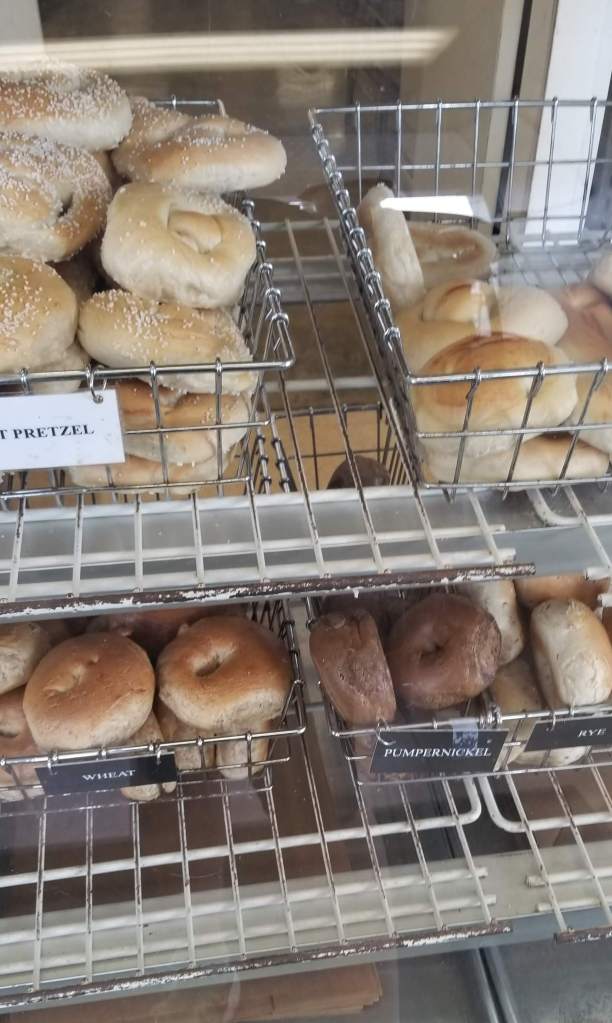 Then, we hit up La-Z Boy. We had ordered a chair for our nursery back in March, but for some reason it was delayed and we didn’t find out until this past week. So, we had to go back in the store and pick out a new one so it would arrive in time – hopefully it’s delivered this week before Baby #2 arrives!

no chair photo, but here’s FW inspecting his bagel

We played it low key in the afternoon. It involved a walk outside (FW loved splashing in all the puddles), and B made us pasta for dinner (my request – a perfect pre-10k meal!).

Sunday morning started even earlier – my alarm got me up around 5 so that we could have enough time to get ready, get FW up, eat something and head downtown before the 6:30 road closures.

Despite the weather forecast looking picture perfect, it rained steadily as we drove downtown, as we walked to the start and as we started the race. Despite being wet, I was happy that it stayed in mild temps and I didn’t overheat (which happens a lot faster at this point in my pregnancy).

I’ll be sharing a full race recap, but all in all the 10k went well. Was it  a lot harder on me than the 5k? Yes. Was I sore before and during and after the race? Yes. But did I feel super proud for having completed a 10k at 39+ weeks pregnant? You bet. And FW and B kept me company throughout the entire route, which made it even better.

After the race, we got some hot coffees. Mine was delicious (or I should say is delicious – I still have some leftover :)) – it had honey and cinnamon in it!

Then, we met up with Dave and Anson for or usual Happy Dog lunch. I got a veggie dog with veggie chili and an egg on top – it was really good!

And since we were in the neighborhood, we picked up a few groceries as well.

Admittedly, I pretty much crashed after that excursion. I’m not typically a big napper, but when FW took his afternoon nap, I took a short one as well. My body was TIRED from the 10k – I felt like I had run much more!

That night, we finished up the day with dinner at B’s parents house. As always, a good end to a quick weekend. And FW always has a good time playing with his cousins, aunts and uncles. 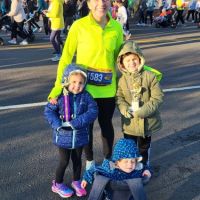