This time last week, I was anticipating my next Saturday night. I’d imagined myself chowing down on some pasta and bread with some other runners, getting pre-marathon jitters and feeling excited and proud about completing my first marathon the next morning.

That’s all changed. As you can probably guess from the title of this post, I found out what was ailing me — stress fractures. That’s right – plural. All week I’d been having some pain in my left foot and even after icing and taking NSAIDs, it wouldn’t go away. There was a nagging feeling that something was wrong, so I took some people’s advice and headed to an orthopedic doctor who specializes in sports medicine.

I had X-Rays on Friday – my left foot and my left lower leg – and sure enough, I had not only stress fractures in my metatarsal, but a large stress fracture in my tibia. That pain that I assumed was shin splints? That was the stress fracture. That weird bump that was growing on my shin? That was my tibia bone, growing back onto itself. I left the doctor’s office wearing an air cast (or as the dr told me, “the most expensive boot I probably owned”), an appointment for an MRI and a strict order NOT to run the marathon for fear my tibia would break in half mid-race.

That’s right, TWO days before the race, I was told not to run. Seventeen weeks of training, hundreds of miles, including a twenty mile training run — and the race was off. I would be cheering on my husband, sister-in-law and friends from the sidelines.

I know that I shouldn’t feel so bad, but I can’t help but feel that all my training was for nothing. All those Friday nights I stayed in, all those Saturdays I spent pounding pavement — what was it for? Maybe next week I’ll be feeling a little better, but right now, instead of pre-race jitters I’m feeling disappointment, sadness and frustration.

Have you trained for a marathon or another race but been forced to back out a few days before? Have you had stress fractures (of course I have them in multiple places). How did you recover – how long did it take to get back in the saddle and start running again? 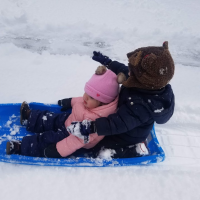