B and I just got back from our recent runcation- a super quick trip to Savannah for the Rock N Roll half marathon. 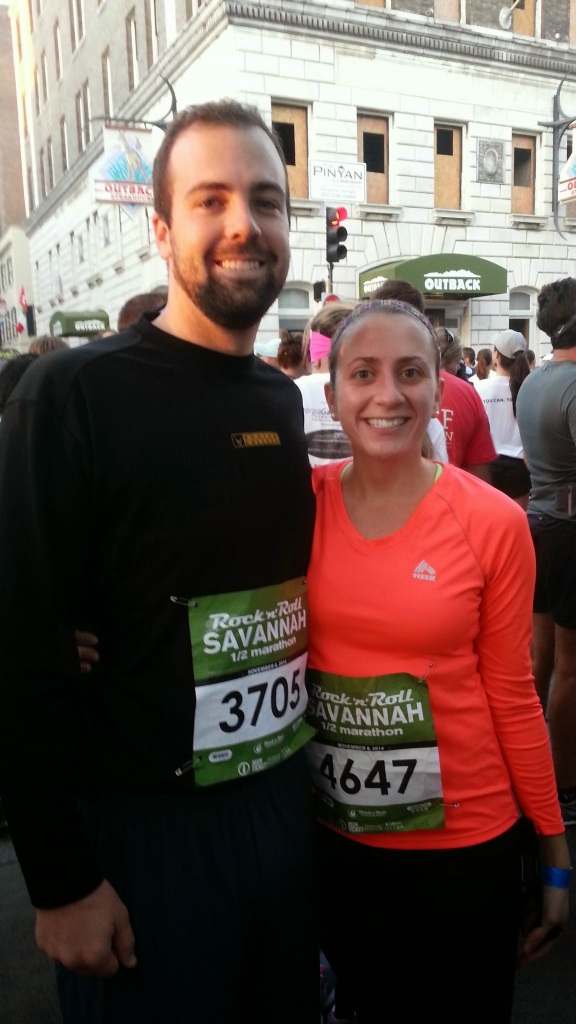 This year on National Running Day, Mary and I took advantage of the deal the Rock N Roll Marathon had going on and decided to book a half marathon entry to another city.  I had done the Cleveland Rock N Roll race and 2013 and was looking to do another similar race, somewhere else. Since I had never been to Savannah and the race was still a few months away we decided to book it! I had made a goal to run three half marathons this year and this would be the third and final race to meet my goal. But as you may know if you’ve been reading for a little while, I ran my third half marathon in September for the Adirondack Half so this weekend,  I was able to run just for fun.

I had no idea Savannah would be so difficult to get to when we signed up for the race (long drive, no direct flights from CLE).  Or how big a deal the race is for the city. In terms of finding a place to stay,  everything was booked or very overpriced (a vrbo we were looking at that’s normally $400 or so for the weekend was $1,000!). In Northeast Ohio we have several half and full marathons – Akron and Cleveland and Towpath – and while they’re a big deal, maybe because there are so many, there are still places to stay,  restaurants to eat at,  etc. ) That being said, we realized the best way for us to spend the weekend would be to drive down and use my hotel points to stay at a Hampton near the starting line and not far from local bars, restaurants, etc. 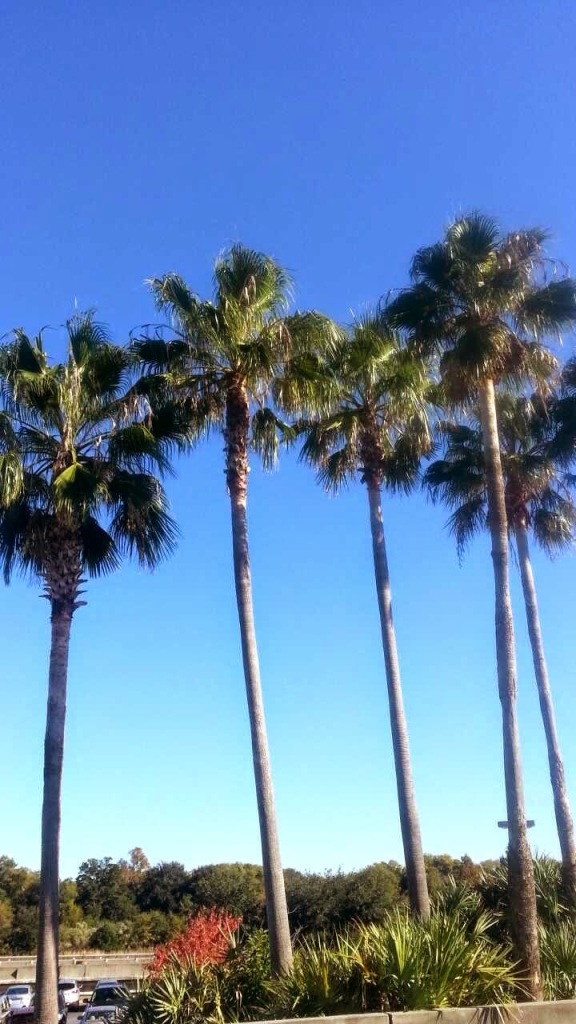 Wait … this is November?

We got into Savannah mid-afternoon Friday and headed right to packet pickup. The expo event was huge! We had to park in the third extended parking lot but the second we got out of the car I could feel the excitement. It was sunny and warm and there were palm trees!! Yes I was trying to hold my cool but I was clearly a native New Yorker out of place among the warm weather and all the ya’alls. 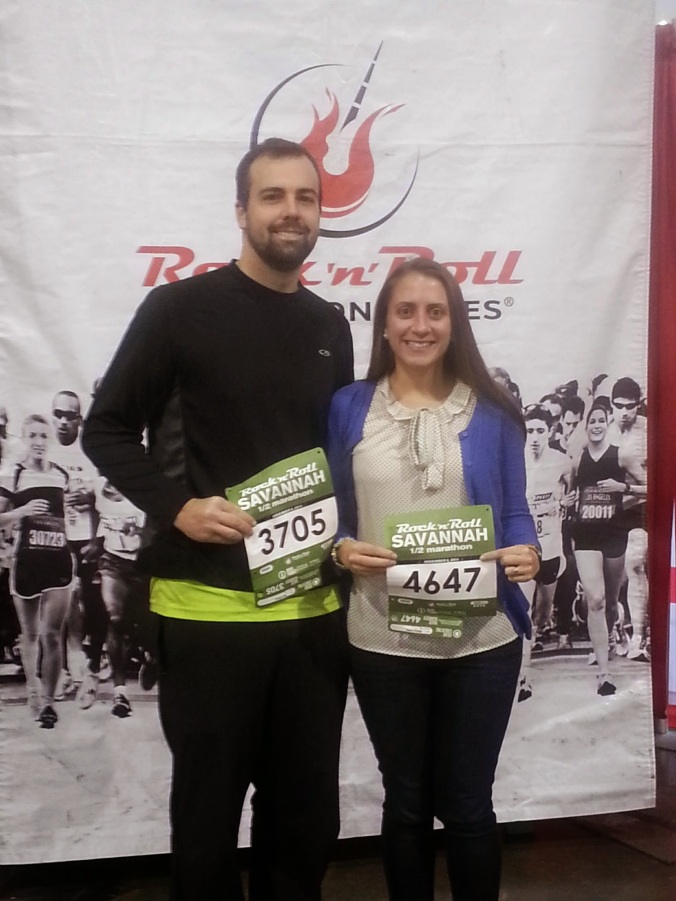 We walked around the expo and tried some samples and I got to stock up on some goodies- my favorite Sports Beans and Gu (vanilla and salted caramel) – before we made it to our hotel.  B was pretty tired – he had driven the whole way and we hadn’t gotten to bed until 3 a.m. the night before – so we decided to just have a low-key evening and walk around the downtown historic area and grab a somewhat early dinner. B, Mary and I have a tradition of eating vegan before long runs but we couldn’t find a vegan restaurant nearby. Thanks to a recommendation from a coworker, we found probably the next best thing – a casual cafe called Kayak. I had a delicious Mediterranean tofu and hummus sandwich with a quinoa and couscous salad. 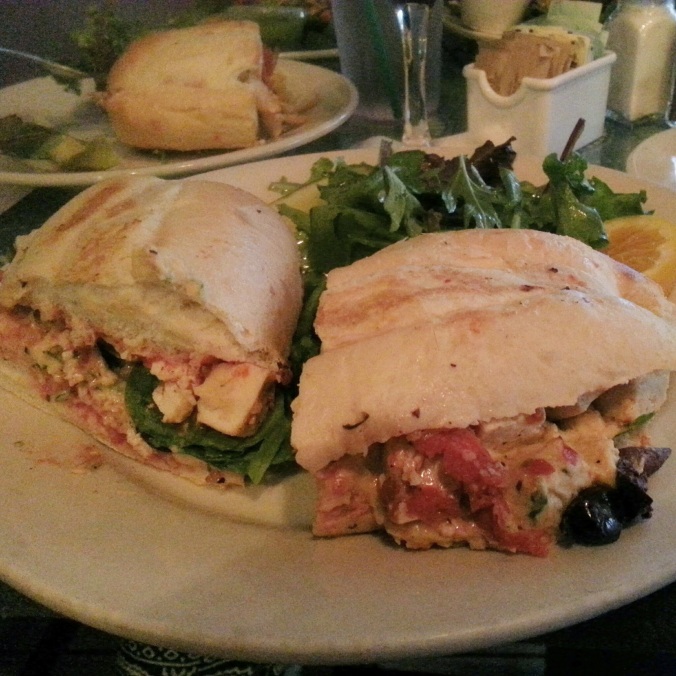 After dinner, we walked around some more, finding success in the Savannah Bee Company (I LOVE honey) and Coffee Fox. It was a pretty early night which meant we got a ton of sleep before the race! 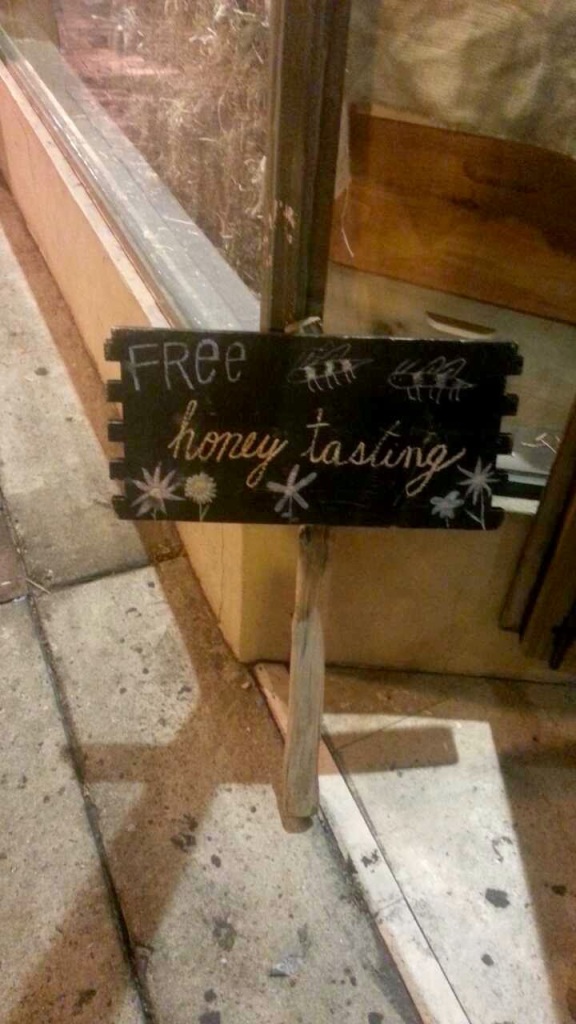 Saturday was race day! A full race recap is coming soon, but everything ended up being pretty awesome.  We made it to the starting line just in time and I really enjoyed myself during the run.

After the race we some stayed for the fun post-race party! The weather was beautiful and we sat on the lawn of Forsyth Park, enjoyed a few post-run beers and listened to the live music. Phillip Phillips was the headliner and he was a great performer! 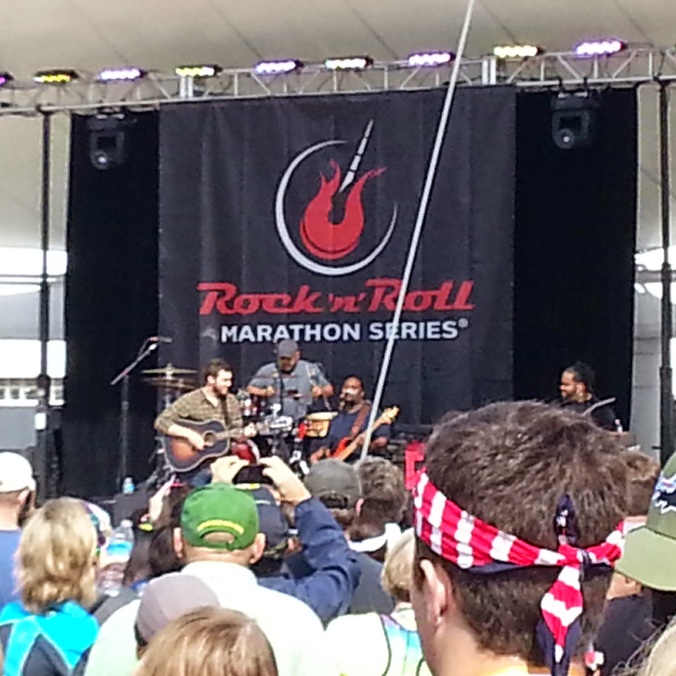 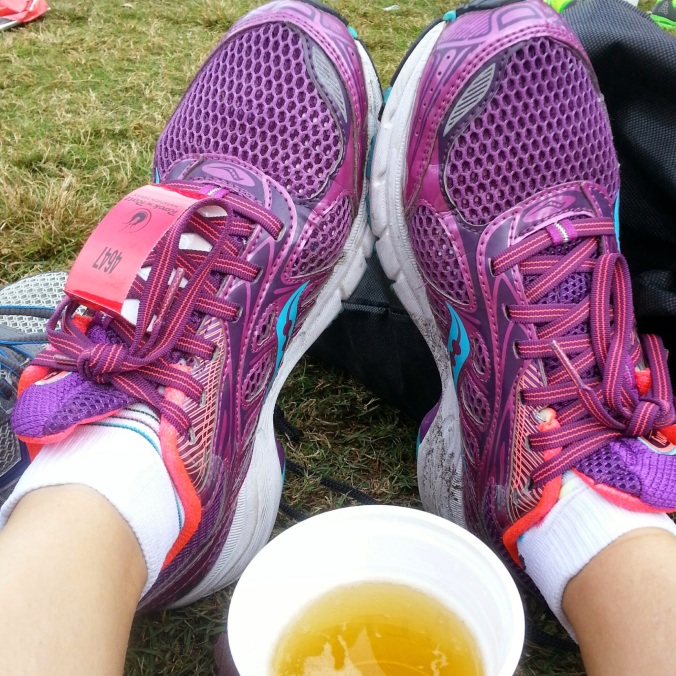 Saturday afternoon we spent some time exploring the city. We were staying in the Historic District, and there’s no open container law so we were able to grab a bite to eat and walk around exploring the area with drinks. Savannah is such a cute city and it was so much fun to explore the area by foot during the race and then in the afternoon as we checked out local shop, bars and restaurants. 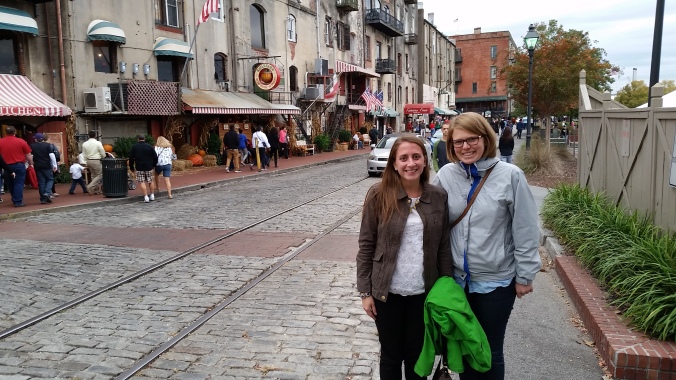 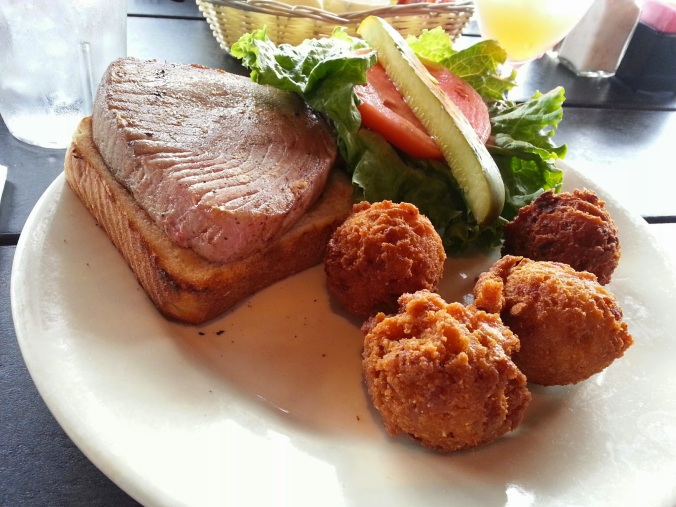 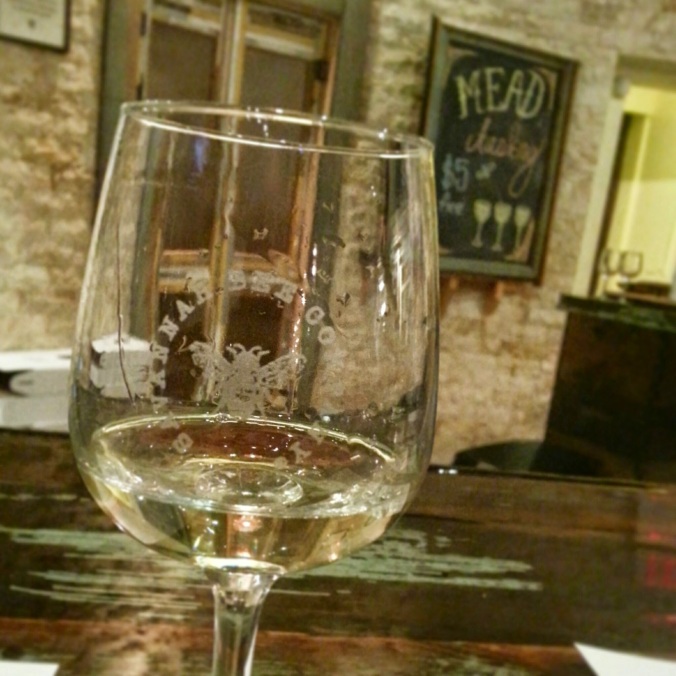 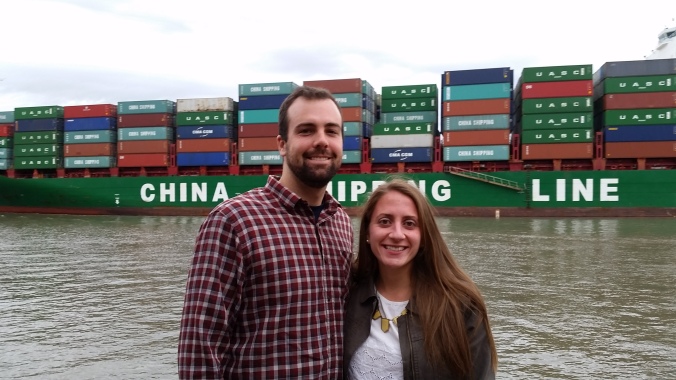 B and I along the waterfront

Sunday came too quickly! After a short stop to find the Mercer Williams House (from Midnight in the Garden of Good and Evil – where the famous Jim Williams lived) we were on the loooong road back to Cleveland.  It was a super quick trip but I’m hoping we’ll be back soon! 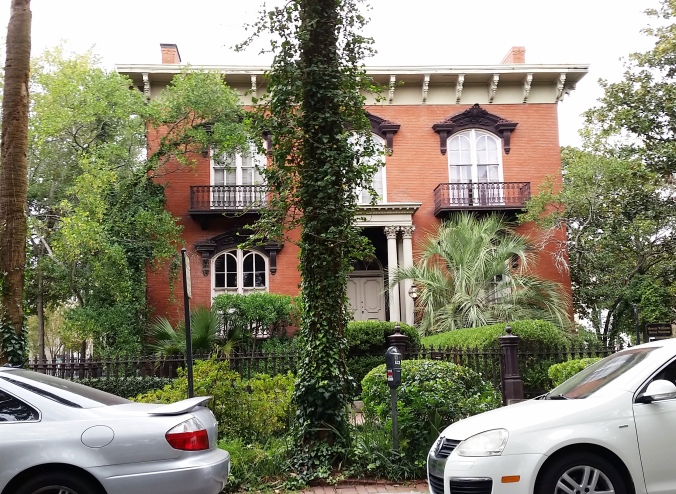 2 thoughts on “Weekend Update: A Runcation in Savannah”