Wednesday night B & I saw Next To Normal at Playhouse Square. It was the last night of the inaugural Review Crew’s duties. It was a bittersweet feeling – I felt proud to know that the first season was through, but sad that our time as Playhouse Square insiders was over. And that’s exactly the feeling the end of the musical – bittersweet.

The show was incredible. The set was really unique – it was stationary, hardly ever moving or changing, yet providing the backdrop for every scene in the play, from a kitchen to a doctor’s office to a high school dance. The orchestra was incredible – not only was the rock music refreshing and catchy (even when the lyrics were depressing, I found myself bopping my head and tapping my toes, it was that entertaining), but the members of the ensemble were all scattered throughout the set.

Without beating around the bush – the lead actress, Alice Ripley, did not live up to the hype. I really really really wanted to like her – she’s from Cleveland (went to Kent State), is a member of the original cast and even won a Tony award for this very performance when the play first came out. Her singing was just uncomfortable. Maybe she had a cold? Whatever it was, it sounded like every song was forced and that she was holding her true voice in.

That being said, the other actors were incredible. The story itself was amazing. The play was well-written, the actors were great and the plot intriguing. For those of you that don’t know what it’s about – read this first, and then decide if you want to see it. In plain words – and without giving away the surprise that I didn’t see coming – it’s a depressing, not-uplifting storyline. It’s about mental illness and all the ways a family is affected by it. It’s about losing loved ones and letting go. It’s not a happy, upbeat musical. When the curtain lifts at the end, you’re left with a haunting feeling, and want to ask yourself, “well, where do we go from here?” But that, in itself, and the fact that I’m still thinking about the play and how it made me feel – is the very reason the musical is worth seeing.

If you’re looking for a feel good, average musical, Next To Normal is not for you. But that doesn’t mean you shouldn’t see it – quite the contrary, as it­­­­ was amazing. It’s a show that gives you an insider’s look into the lives of a seemingly normal family, that’s falling apart. It’s a show that makes you think about yourself and examine the life you’re living. It’s a show that stays with you.

The show is in town through the 19th. Buy tickets today here.

See what the other Review Crew members had to say:

Plus – here’s my new favorite song … such great music!

looking down on machu picchu

I’d be lying if  said my passport didn’t contain quite a few stamps. I’ve visited Costa Rica, Peru, Spain, Italy and France. I studied abroad in college and lived for more than four months in Ecuador with an Ecuadorian family that spoke no English. i swam with the sea lions on the Galapagos Islands. I’ve hiked the Inca trail to reach Machu Picchu. I just returned from a week long honeymoon on Tortola in the British Virgin Islands. So it really should come as no surprise to me that my brother would follow in my footsteps. Still, I couldn’t help but shriek in jealousy when I received an email from my brother outlining his summer travel plans, as nonchalantly as if he were describing what he needed from the grocery store. The email is below – I’ve shortened it and bolded the important parts for you:

As some of you may already know, I will be traveling abroad this summer. I leave today from Boston to spend a few days in Paris with a friend from Dartmouth. I am in Paris until Tuesday, in which I fly to Venice. There, I will be studying Italian, art history, and the likes at Ca’ Foscari University through a Columbia-affiliated program. The program ends in mid-July.

The final leg of my trip will take me to India, where my friend Olivia and I will be visiting our other friend, Mia, who lives in New Delhi. We will be exploring the city to its fullest (as well as nearby destinations like Agra). At last, I leave on August 28 for an epic and exciting plane ride home to New York …

… I hope you all have a wonderful summer.

How will I be spending my summer? In my current home – Cleveland. I emailed my boss, telling that I’d be joining my brother for the net few months and hope he didn’t mind — but he just laughed it off. So I guess I will not be traveling to the Italian countrysite, helping farmers make olive oil or preparing grapes for wine. I won’t be jetsetting to Paris, tasting crepes, chocolate and cheese. And I can guarantee I won’t riding an elephant or having my own sort of Slumdog Millionaire / Bollywood adventure in New Dehli.

What will I be doing? In honor of my brother, I’ll  be spending the summer being as international as I can, right from Cleveland. Here’s what I’m thinking for my international staycation:

In honor of his trip to France:

His various escapes throughout Italy:
His finished trip to India

How else can I celebrate all the international-ness that Cleveland has to offer? Do you have any traveling family members who you enjoy?

A Recent Pic of My Brother and Me 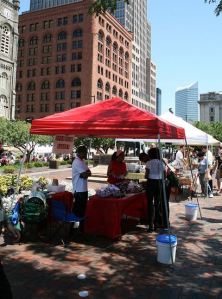 This weekend was the unofficial start of summer! Which not only means we can wear white (does anyone actually follow that rule?), but also enjoy fresh, locally grown produce in Northeast Ohio. One of my favorite things about summer is all the fresh fruits and vegetables that are available everywhere, especially at Farmer’s Markets. If you work/live downtown like me, besides going to the West Side Market, there’s no better way to get fresh fruits, veggies, and other food (including my favorite, Ohio City Pasta!). Some downtown Farmer’s Markets I’m looking forward to frequenting during lunch breaks include:

Not lucky enough to hit one of the downtown spots? A full listing of NEO markets can be found here.

Where’s your favorite place to find fresh produce? Do you have another favorite Farmer’s Market?