A few months ago, B booked us a week at a cottage in Wellfleet, Cape Cod. It would be his first time in the Cape, and my first time staying in Wellfleet. Growing up on the east coast, I had many fond memories of spending summer weeks on the Cape with my family, but this would be my first time going just with B and to the Lower Cape.

I was not disappointed. The house was just as VRBO had suggested – down the street from the beach and the perfect size for a week’s retreat. AND without Internet or great cell reception, which meant we were truly able to unplug (at least for the most part).

Friday evening we left Cleveland and then drove into Albany and spent the night with my parents. Saturday morning we got up early, enjoyed a quick breakfast with my parents, including our year-old wedding cake (which was still absolutely delicious! How is that possible?!), and then we were on our way to Cape Cod for the week! Well, sorta – we had to stop at the most amazing place first – Prime Outlets in Lee, Mass.! I miss this place so much. (Sidenote – yes I know we have “outlet” in Northeast Ohio, but show me one with J Crew, Polo, Banana Republic, Ann Taylor, GAP AND Brooks Brothers in one place!)

As soon as we got to the Cape we checked out our place, walked to the beach, and then enjoyed a typical casual Cape Cod meal on the harbor – lobster rolls and fried oysters. Delicious! I gobbled up the food before grabbing a photo – but was able to get in a quick pic of our scenery.

Outdoor dining – with a great view!

Sunday, the weather was gorgeous so B and I spent most of the day outside. In the morning, we walked to the nearby French bakery and split a Parisian sandwich (again, no photo.. too delicious!) and bought some lardon et fromage bread to go. Then we hit the beach. I lay down outside, enjoyed my newest reading material (11/22/63 by Stephen King. Run, do not walk, to your nearest bookstore to get this. It’s no 50 Shades, but it’s impossible to put down!) and got in a healthy dose of Vitamin D (hey, doctor’s orders, right?). That evening, B and I checked out Wellfleet’s Main Street and then enjoyed a seafood dinner and drinks at the Bookstore. We split a dozen oysters on the halfshell (A Wellfleet specialty! The restaurant literally walks across the street to the harbor twice a day to pick them fresh) and I enjoyed the Fisherman’s Dish which was cod mussels, shrimp and clams in an awesome broth.

One of many seafood dishes

Monday, B and I spent some more time on Main Street and visited all the galleries and shops. But on the way, PJ’s Family Restaurant caught our eye – I’d heard that it was known for its lobster rolls, so we had to stop and check it out. B even loved it – and he’s not a lobster guy! After our delicious lunch, we headed to the downtown area. Fun fact – besides being the first place in the world to have wireless telegraph technology – and not the phone wireless technology – (Did you know the Titanic’s SOS signal went to the wireless station in Wellfleet?) Wellfleet also is known for having an abundance of galleries and being extremely welcome to artists. We enjoyed an afternoon ice cream on the harbor and a few drinks at Winslow’s Tavern, another great eatery on Main Street. For dinner, I was craving lobster so we returned to PJ’s where I got the lobster dinner and B got a burger. Are you keeping track of the lobster? That’s 2 lobster rolls and one 1 ¼ lb lobster so far … 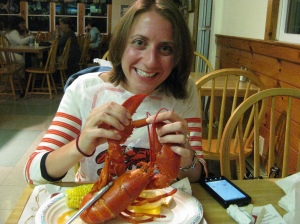 Waaay too excited for my lobster

Tuesday we decided to check out Provincetown and then go whale watching! I could write a blog post on whale watching alone. While Provincetown and its shops and ice cream were great, whale watching was spectacular. We went on a 3 hour cruise with the Dolphin Fleet Whale Watch, led by an amazing naturalist. We saw 20+ whales (and some of them, multiple times) and a few dozen dolphins. It was amazing to watch them feed and just hang out in the wild. We even saw a baby whale play around while his mother fed. Some photos and video from the trip: 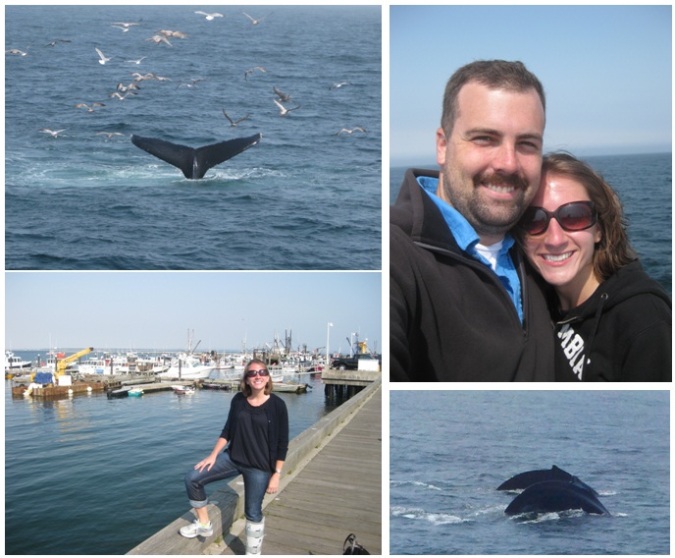 At night B and I decided to eat dinner in our cottage – and we chose fresh lobster from the local seafood shop. New lobster total: 2 lobster rolls and 2 lobsters.

More to come on the fabulous week we had .. and possibly some more lobster!
(Part Two of the post can be found here)