Last weekend I made my first trip down to southern Ohio for a German-filled weekend. Let me first state that I have never been to Germany and I am not at all German. Not even close. What is the opposite of German? That’s probably me.

B, B’s brother and I made the trip down Friday night and met up with B’s brother’s girlfriend (who is in school in Cincy) and B’s friend (who studied in Germany with B nonetheless). The first night we ventured over the border to Kentucky to check out the Hofbrauhaus. Many masses of beer was consumed and I even saw a man propose to his girlfriend on the stage where a German music band was playing! (Cute, but not for me). 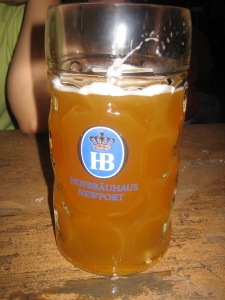 The next day we went to Oktoberfest! I had no idea but Cincinnati has US’s largest “most authentic” Oktoberfest.  I spent the morning (10 am was too early for beer especially after the late night at Hofbrauhaus) drinking some yummy cider, switching to traditional German beer in the afternoon. 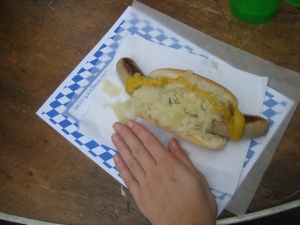 I even sampled a “Super Brat” a bratwurst that was twice the normal size (it didn’t fit in the bun they gave). Just so you know, I’m not the only one who “pigged out” (haha a  pun!) at Oktoberfest…according to their website, an insane amount of food is consumed each year:

The highlight of my day was when the Bier Band serenaded us to various traditional German and then American pop songs. Their lead singer even came up right next to me during “My best friend’s girl friend.” I took some great video (and photo below!) but it doesn’t do them justice. I mean, seriously, imagine a bunch of guys singing and playing instruments (including horn and accordion) AND wearing liederhosen.  Hilarious.

Bier Band ... drinking and not singing

Great fun! The theme that just about sums up the weekend: It was the best of times, it was the wurst of times.